From fire dancing to name days

There are many Bulgarian traditions and celebrations that often get a “Really?!” reaction from foreigners, and the following are a small selection. Many of them originate from pagan times or have Christian roots, and have been strictly followed for centuries.

One of the most highly valued customs in Bulgaria is called Baba Marta (literally, Granny March), starting on the 1st of March and celebrating the beginning of spring.

Family members, relatives, friends, and colleagues give each other white and red tassels that you normally wear on your wrist. They are only taken off when you see a stork or a blossoming tree, which symbolise the messengers of the arrival of the warmer season. 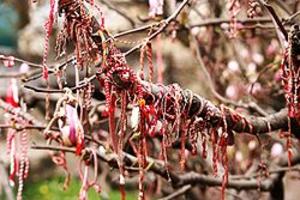 These tassels, called martenitsa, are exchanged between people with wishes of health, luck and happiness. Originally wishing for fertility and fruitfulness of the crops, martenitsas are still often hung on fruit trees and livestock in rural areas. 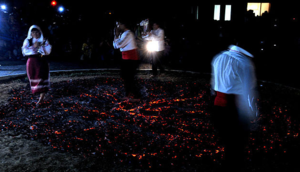 Fire dancing, more famous in Bulgaria as nestinarstvo, can be seen in villages around the area of Bourgas (a city in the SE of Bulgaria), mainly on the holiday of St. Konstantin and Elena (May 21st).

Apart from celebrating the two saints and the fire dancing, the holiday symbolises the transition from spring to summer. The dancers, who are most often women, perform a dance on hot glowing embers whilst in a trance state. The tradition implies that the fire dancer is chosen and guided by the saint of the holiday, whose icon is being held while dancing on the embers. Often during the traditional dance, the fire dancers are said to be able to connect to the saint and through this connection they can interpret omens, give advice, foretell the future, or communicate with the dead.

Name days are paid a lot of respect in Bulgaria, almost as much as birthdays. Many people are named after saints, for example everyone who is called Georgi will celebrate their name day on St. Georgi’s day (May 6th). A big family meal takes place on the particular saint’s day in order to celebrate the name day.

Palm Sunday, known in Bulgaria as Tsvetnica is the holiday of flowers and trees, celebrated on the last Sunday before the Christian Orthodox Easter. On this day, everyone named after a flower or a tree celebrates their name day with a big family gathering and a meal. For centuries people have believed that it is a day of the forests, meadows and fields. 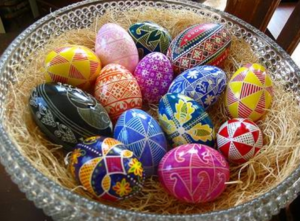 The Bulgarian Orthodox Easter traditions vary from the common Easter traditions: they involve egg colouring, egg breaking and Easter breads. Tradition directs that the eggs are coloured on the Holy Thursday before Easter Sunday, and the first coloured egg is always red, symbolising Jesus’s rise from the dead. Then the rest of the eggs can be painted in all colours and often a wax candle is used to draw on them.

The egg breaking custom takes place before the big meal and it involves all the family members tapping their eggs against each other, after each person has chosen a colourful egg. The person with the last unbroken egg is said to have a whole year of luck to look forward to.

The typical Easter bread in Bulgaria is called kozunak and it is a sweet bread, sometimes with raisins in it.

The New Year’s Eve chasing away of evil spirits

The tradition of chasing away the evil spirits of the past year dates back to pagan times, and is nowadays an exciting event for children in Bulgaria. Before New Year’s Eve approaches, children prepare (with the help of their parents) a survachka, which is a tree branch, decorated with all kinds of coloured threads, dry fruit, dry peppers and popcorn.

The kids also learn a few verses, which they recite whilst beating the backs of their family and relatives (lightly of course) with the survachka. The symbolism in this ritual is that through lightly beating the backs of their loved ones, the young ones chase the evil spirits and misfortunes of the passed year away, wishing them only fortunate events during the approaching year. In an act of gratitude, the elderly ones give sweets and coins to the kids. 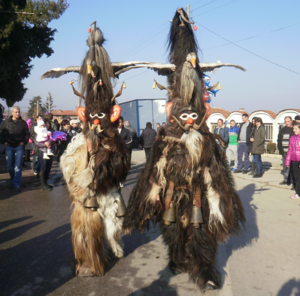 This event takes place twice a year in Bulgaria - the days around New Year’s Eve and on the holiday of Sirni Zagovezni (celebrated seven weeks before Easter).

The participants in this ritual are called kukeri and they are dressed-up men in handmade costumes and masks, all made of wood, leather, fur and copper and bronze bells hang off them. They dance, play games, make jokes, jump, jingle the bells and roll on the floor. Some of the masks the kukeri wear have two faces: on one of the sides the face is good-humoured, whilst on the other it is grim and sinister looking. This represents how the good and the bad inevitably coexist in this world. The outcome of these dances and games are that the evil spirits that the winter had brought have been chased away and only good is to be expected from now on.

Whilst February 14 is the international day of love, Valentine’s Day, it is traditionally the Winemaker’s Day in Bulgaria. Strangely enough the two celebrations fit well together - most couples tend to drink wine on Valentine’s Day.

Bulgarians celebrate both holidays: couples normally focus on Valentine’s Day and the single ones have a tradition of appreciating Bulgarian wine in huge quantities! The patron saint of the winemakers is St. Trifon the Pruner, and this celebration marks the death of the winter and the birth of the spring, via appreciating winemakers and vine growers. The original tradition says that the more wine that flows on this day, the more generous the next harvest will be. So, drink on!

Jordanov Day or cross-searching in the cold waters

Jordanov Day is celebrated on the 6th January and it is one of the most ancient Bulgarian holidays. The original interpretation of the holiday is that on this winter day, God came down to Earth, whilst Jesus Christ was being baptised by John the Baptist in the River Jordan, and pronounced him His son.

The tradition entails a priest ritually throwing a cross into a river, lake or any water basin, and all the men wishing to be healthy over the coming year jumping in the ice cold waters to look for it. Old beliefs dictate that if the cross freezes whilst in the water, the year will bring fertile crops.

Throwing away the umbilical cord