How do expatriates differ from the average population? Though comprehensive data about expatriates worldwide does not exist, a number of sources helps to identify some characteristics which many expatriates have in common.

When talking about expats as a group, it is important to bear in mind that there are large differences between one country and another.

However, we can generalise that compared to the average, expatriates tend to more highly educated, have a higher than average income and face some very specific challenges when moving abroad (like learning the local language)

Expatriates from developed country tend to be highly educated. According to OECD statistics , the expatriation rate among highly skilled workers is generally higher than that of the average population. 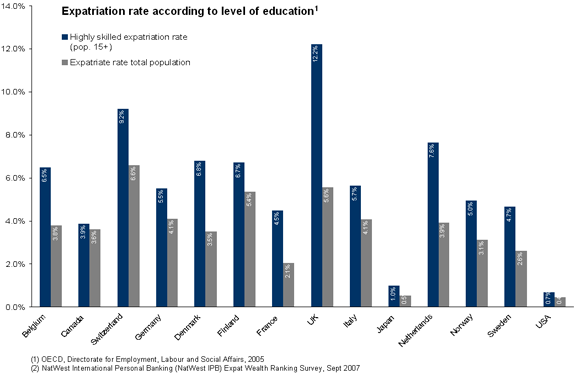 More than 30% of expats earn expatriate salaries in excess of £100,000 (~€120,000) per year (HSBC Expat Explorer Survey, 2008).In addition to their salaries, many expat also receive special expatriate benefits that go significantly beyond the benefits of other employees. These can include relocation help, accomodation benefits and special family benefits such as financial support for private schooling.

Due to their higher than average incomes and addition support from employers, many expatriates experience a more luxurious lifestyle abroad than at home. 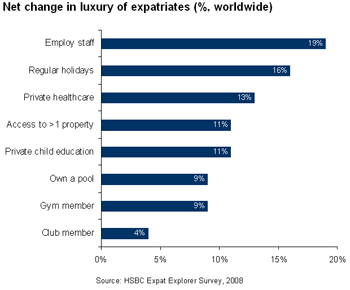 More than half (58%) of expatriates save and invest more money abroad than in their home country - despite spending more money abroad than at home. After their move abroad, expatriates tend to spend more on food (+25%), shopping (+22%), accommodation (+18%) and socialising (+15%) (HSBC Expat Explorer Survey, 2008). Nevertheless, their expatriate benefits often allow them to enjoy luxuries abroad that they didn’t have at home, such as private health care and private education for their children.

Language and other problems

When moving abroad, expatriates face a range of challenges. Many expats do not speak the local language of the country they’re living in, although an increasing percentage tries to learn it. This language barrier makes it harder to deal with local service providers, thus generating a need for specialized services. Despite their language problems, an increasing number of expatriates try to make friends within local communities, which goes against the stereotype of the “typical expat” that doesn’t try to integrate into the local society.