Business etiquette in the UAE

What you need to know

In the UAE, Islam is more than a religion; it is a way of life which is reflected throughout the culture, laws and attitudes of the people. Although Dubai is now viewed as relatively tolerant and cosmopolitan due to the large number of expats living there, it is essential that you are sensitive and behave appropriately when conducting business in the UAE.

Whether you are relocating to the UAE permanently or you are on a business trip, it’s important to be aware of these cultural differences in order to organise or partake in successful business meetings or develop potential partnerships.

Fit into their schedule

When conducting business in the UAE, it is important to know that Muslims pray five times a day: at dawn, midday (after the sun passes its highest point), the late part of the afternoon, just after sunset and between sunset and midnight. This means that you will need to schedule your business meeting outside these times to avoid disruption and disrespect.

Another point to remember is that in the UAE, the working week does not begin on Monday and end on Friday, but instead the first day of the week for them is Sunday and their last day is Thursday. Friday is the Muslim day of prayer and rest known as Jummah.

Alcohol is a controversial subject in the UAE. What you need to know is that alcohol can only be consumed by non-Muslims in establishments with an alcohol license. Having said this, it’s probably wise to avoid alcohol during your business lunches as it is not customary to drink during a meal.

When it comes to choosing food, remember that Muslims do not consume any pork products or shellfish. It’s unlikely that you will offend anyone if you do order a dish containing these ingredients, especially if there are other westerners present, but it is advisable to stay clear of them in the presence of any government or religious officials; a respectful attitude will go a long way.

Dress and act the part

Handshakes are still the customary way to meet colleagues and make agreements in business. In the UAE, men and women generally do not shake hands with each other, so it is advisable for you to wait for a hand to be offered to you. If you would rather avoid handshakes altogether, place your right hand over your heart instead.

Dressing modestly is important in a country like the UAE, where a conservative style reigns in the workplace. It is preferable for both men and women to have their shoulders, arms and knees covered at all times. Work attire tends to be formal with suits being the norm for all business occasions. It is also advisable to wear closed-toed shoes, so despite the sweltering heat keep those feet hidden away.

Business is about building relationships 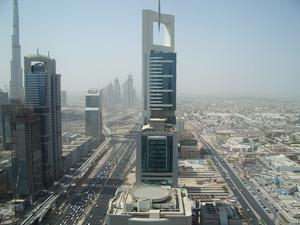 The saying “it’s not what you know, it’s who you know” rings true in the world of business in the UAE. Personal relationships and family ties are built up on mutual friendship, trust and respect.

The foreign employee may seem at a disadvantage in this regard, which is why first impressions are so important. Contacts and friends in the right places can act as stepping stones to greater success, so any relationship built in the business circle should be treated with the utmost respect. It is also worth noting that if you are granted a favour this will not be forgotten and it is expected that you reciprocate this generosity.

If your business trip coincides with the month of Ramadan, you need to know that the strict fast includes everyone, even non-Muslims. During the daylight hours, Muslims from all over the world abstain from food and drink. There are however, many large hotels which have special screened off areas for non-Muslims to eat and drink, with the exception of alcohol.

At the beginning of Ramadan, it is courtesy to greet those observing Ramadan with the following phrases: ‘Ramadan Kareem!’ meaning ‘noble Ramadan’ or ‘Ramadan Mubarak!’ meaning ‘blessed Ramadan’.

It’s always useful to have a couple of expressions under your belt when conducting business in the UAE because this not only shows your interest in their culture, but also demonstrates a respectful attitude. The customary greeting is ‘As-salam alaikum’, meaning ‘peace be upon you’. If replying to a greeting you should respond with ‘Wa alaikum as-salam’ which means ‘and upon you be peace.’  When asking for some something, you should say ‘Min Fudlek’, meaning ‘please’, and ‘Shukran’ for ‘thank you’. Lastly, if you have come to a business decision and agree to proceed to the next step, say ‘Inshallah’, meaning ‘God willing’.

This article was submitted by Ibtisaam Ganief from Dubai Properties , a real estate pioneer developer which oversees various property developments for both residents and investors.