If you’re after a holiday of sun, sea, sand and surf, with plenty of options for refined wining and dining, or simple fare, this truly cosmopolitan, safe city fits the bill . . . with plenty of room to spare. You can also be assured of superb entertainment, whether at a bar or at the theatre.

Dubai enjoys more than 300 days of sunshine a year. Winters are glorious, with low humidity and daytime temperatures hovering at the 30°C mark (18°C at night). But summers are hideous, with unofficial temperatures regularly exceeding 50°C during the day. Accompanying high humidity (90 per cent and beyond on occasion) makes for a very unpleasant experience if you happen to venture outside. Even during a summer’s night, temperatures rarely dip below 30°C. 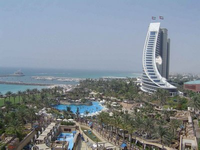 More and more people are becoming aware of this slice of Arabia through its exposure on the world stage, along with the intense global marketing efforts of the Department of Tourism and Commerce Marketing (DTCM) and Emirates airline, which, with a seemingly bottomless pit of money at their disposal, have been able to enthuse and extol the virtues of the city without restraint for several years.

The nuts and bolts

Dubai is one of seven emirates that make up the United Arab Emirates (UAE), a country founded in December 1971. Covering an area of some 83,600 square kilometres across the Arabian Peninsula, the country consists of Abu Dhabi, the largest emirate and the location of the nation’s capital; Dubai, the second-largest emirate at some 3,885 square kilometres, Sharjah, Ajman, Umm al-Qaiwain, Ra’s al-Khaimah and Fujairah. With the city spanning little more than 50 kilometres from end to end, you certainly don’t have to go far to find everything you’ll ever need within a stone’s throw.

The language of the land is Arabic, although English ranks alongside, especially in business, and is spoken by most . . . to varying degrees. Islam is the country’s official religion and, although the UAE Constitution allows for religious freedom, Article 322 of the Federal Penal Code states that any person caught promoting any religion other than Islam without permission faces a jail term of not less than a year, or a fine of not less than Dhs5,000.

Dubai has been a huge PR success. While effectively distancing itself from the fundamentalist/terrorist stereotype with which the Middle East has, for some, become labelled, especially post-9/11, it has been able to present itself as a moderate, liberal enclave of peace and prosperity. In recognising its supplies of oil were finite (reserves are estimated to run dry by 2010), Dubai has sought to invest in opportunities that reduce its dependence on the black gold. As such, it’s wooed the world by creating an infrastructure that’s esoteric, eccentric, practical, foolish and incredible; an infrastructure that wholly embraces concepts whose origins can be traced to the REM sleep of some of the world’s most creative architects.

According to the Gulf News, General Sheikh Mohammed bin Rashid Al Maktoum, the Ruler of Dubai and the country’s Prime Minister and Vice-President revealed his vision for Dubai to reach the status of the world’s most powerful cities and outrun them in every aspect and at all cost; and lead the world in the race towards globalisation. His plans also seek to empower UAE nationals to take over certain roles currently undertaken by non nationals and, as such, expatriates might be wise to consider Dubai a short-term sojourn, a dip of the toe into a different culture and mindset.

Self censorship is common, along with the sending of new book and magazine titles to the Ministry of Information’s Censorship Department, prior to publication, to ensure a consistent message. Not only that, some 140 Arabic, 380 English, 455 Indian and 40 French newspapers, magazines, books, films, CDs, DVDs and software entering the country have to pass through the 14-man Media Censorship Unit at Dubai Cargo Village before hitting the shelves, resulting in many features, quizzes and photographs bearing too much flesh being either ripped out or scribbled over with heavy black ink.

Dubai is a study in nouveau riche: vulgar and opulent. For many, it is a master of the opaque, of smoke and mirrors, and is perceived as having little regard for fair play. Someone once said that: “The difference between Dubai and Disney World is that Disney World knows it’s a fantasy”.

Dubai is also the land of great opportunities where almost anything’s possible if you have the get-up-and-go to get it done. Where one person’s plan might fail, another’s will succeed if he or she knows the right people.

There are seldom any boundaries with what can and can’t be done, but laws are ambiguous, non-existent and not seen to be enforced so, in the ensuing confusion, it’s often best to try something and later apologise for it if it’s wrong, rather than not try it at all.

On a final note, although you’ll read the, sometimes harsh, realities of living and working in Dubai within this book, please do keep in mind that many people still enjoy a great time in the emirate (and have no wish to leave). One major plus point is that if you do decide to move to Dubai, you’ll meet an eclectic, friendly mix of people, from all walks of life; find you have much in common and gain friends for life.