If you’re coming to live in Dubai, you, your husband, wife or partner are most probably coming to work. With so much competition for jobs at home, you have many more opportunities to do what you want in Dubai than elsewhere, especially if you have a university degree and know the right people, because there’s such a shortage of quality individuals in the workforce.

However, if you’re used to Western, staff-friendly working conditions, employment in Dubai may come as something of a shock. With so much cheap labour from Asia and Eastern Europe, certain jobs are, in effect, closed to Westerners, including many ‘trade’ occupations, such as carpenters and plumbers; petrol-pump attendants, shop assistants, construction workers and waiters and waitresses.

There are also several crucial points with which you need to be aware. Once you sign a contract (which may be fixed-term or open), the company for which you work has to sponsor you. As part of the process of acquiring sponsorship and obtaining your residence visa, you must provide a blood sample, which is tested for communicable diseases. If you show any indications of disease, you’ll be deported straight away.

Your life is, for the most part, dictated by the company for which you work, whether you need to rent a villa or apartment, want a bank loan to purchase a car, want to subscribe to some mobile-phone services or obtain a liquor licence; all well and good if you work for a respectable company; but what happens if you don’t? 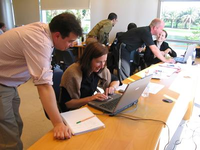 The UAE Law No 8 of 1980, as amended by Law No 12 of 1986 (the Labour Law), governs employer/employee relations, such as hours of work, leave, termination rights, medical benefits and repatriation. This law is meant to protect employees – and it does to a certain degree – although the employee has little recourse if it’s defied.

In an attempt at updating the 20-year-old law, the government posted a new draft Labour Law on the Internet at the beginning of 2007, and invited the public to comment. As a result, Human Rights Watch compiled a 15-page report that outlined the draft law’s deficiencies. See http://hrw.org/backgrounder/mena/uae0307/ for full details.

The maximum working hours for the private sector are officially eight per day, or 48 hours per six-day week (with nine hours for those in retail, hotels and restaurants). However, 10-hour days over a five-day week are common, with no overtime paid and, in some cases, no time off in lieu of overtime worked either.

The official weekend for the public sector was changed in September 2006 from Thursday/Friday to Friday/Saturday. While many private-sector companies already operated a Friday/Saturday weekend to remain as close as possible to the Western working week, the government is studying whether it should apply this ruling across the board to all private-sector companies because, according to the Federal Labour Law, only Friday is a day off.

A fair deal in the work place?

There seems to be little concept of fairness when working in Dubai; the colour of your passport tends to decide the level of job for which you can apply. It’s the norm, for example, for job adverts to stipulate the nationality and gender of candidates (eg US/UK-educated female).

Salaries also differ according to nationality; for example, a hotel worker from the Philippines told the Gulf News that, as a waitress with two years’ experience, she earned just Dhs900 a month. Yet a Romanian colleague, doing the same job, earned Dhs1,300 a month.

Unfortunately, this issue is well known by anyone who’s spent more than five minutes working in the UAE.

Recognising the problem, Dubai Municipality announced, in 2006, that it had embarked on the Labour Characteristics Survey. A consultant with the Municipality’s Statistics Centre told the Gulf News: “We want to see if there is discrimination among professionals based on their nationalities, and see the level of wages according to profession and educational background.”

In December 2006, the Gulf News reported findings from the Statistics Centre which revealed that a massive 77 per cent of Dubai employees are dissatisfied with their jobs. Citing wages as a major factor for their unhappiness, the poll was conducted with 8,130 families. In addition, the average time it took people to get to work was 46 minutes each way.

Flexibility in the work place?

Many people come to Dubai seeking a better quality of life, shorter working hours, a great tax-free salary and a work/life balance. While this is true in many respects, certainly when it comes to entertainment and leisure, several perceptions differ markedly from reality. Many people work exceptionally long hours, for seven days a week in some cases, with a working week that would leave many from home balking at the strain.

You may be used to working flexitime, or part time. However, you’ll find very few opportunities to do so in Dubai. Full-time working is the rigid norm.

Of course, with the attitude of “Well if you don’t like it . . . leave”, companies simply cannot evolve, as people do, indeed, take them at their word and leave. This lack of evolution has resulted in outdated working practices being the norm for many in Dubai.

Even managers who lure you with the promise they work along Western lines may have been in the UAE too long to recognise what these standards are any more and, as they have little incentive to change, they can treat staff as they like. The resulting clash for many 21st-century employees, working in these conditions, which are also heavily stacked in the employers’ favour, becomes untenable very quickly.

If Dubai is serious about playing with the big boys on the international stage, it simply has no choice but to improve working conditions and provide a level playing field for employees. In this way, it will not only continue to attract quality people, but will be able to retain them over the long term too.