France - A Mule in Rouen

France
A Mule in Rouen

Back in Rouen. Back in Rouen. The old familiar train from Dieppe swept along the valley of the Scie, deeply verdant after weeks of rain, the apple blossom piled into snowdrifts.

Through the station concourse at Rouen, a majestic arc of light and sound, into the Café Metropole to find Christophe and Lorette sparkling with delight. Some things have changed. The cathedral has finally shed its' scaffolding, the square now too tiny to contain its' unblemished splendour. And the streets are no longer strewn with 'crottin de chien', a disorienting development as I am used to walking about Rouen with one eye pointing forward, the other scouring the cobblestones like a searchlight. I remember a man nonchalantly standing sentry as his dog performed on my doorstep, a look of strenuous intensity on its' face, like a commis chef piping a profiterole. Part of the same birthright that entitles a Frenchman to to waft cigarette smoke down your throat, just as you tuck into dinner, the fug rising to reveal a plate of oozing red meat, adorned with a single baby carrot. But what is this? A poster advertising a Veggie Pride march to Paris. The national identity in tatters. 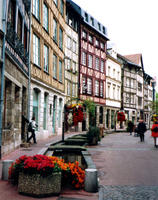 Normans are proudly territorial, everyone scouring their local paper each day as if in direct communion with the oracle. I remember reading about a concierge who had unwittingly solved a burglary as he rummaged through the wheelybins for evidence of the underside of his tenants' lives. One day he unearthed a swag bag that had been deposited in haste, the scent on the booty matched that of a local hoodlum, et voilà, one burglar behind bars, the streets safer, and if every concierge shared the same civic duty, we could all leave our doors unlocked and sit round the hearth rosy-cheeked, papa playing the mandolin, mami spinning wool in the corner. In Brighton there is no need for concierges, the seagulls sift through our rubbish in brazen beaked manner. The other day I caught one rattling my dustbin lid like a wifey during a hunger strike. Totally undeterred by my presence, he drained every plastic container of its' last remnant of nutrition, just drawing a line at a polystyrene McDonalds bun. Imagine if the Brighton constabulary could harness the seagulls as the French do their concierges. From chimney pot duty, they would cast a beedy eye over the straggling n'er do wells on the London Road, bristling with crutches and rabid dogs. At the first sound of a shattered beer bottle they would launch into a scorched earth swoop, driving the rabble into the nearest hostel, begging for a floor to scrub and swearing life long temperance.
My habitual Rouen resting place in the shadow of the Dungeon, is no more. Allowed myself a little luxury at L'Hôtel de la Cathédrale. Sumptuous breakfast in a salon supported by ancient Norman beams, with coach lamps hanging from anchors and cherubs brandishing torches. Each table tuned into the neighbouring tinkle of coffee cups. One night, after Monsieur Concombre had led us to the Clipper Bar, O'Kallaghans, L'Insolite and back again, Mathilde was no longer fit for the road, so I did the seminal French thing and smuggled a woman upto my bedroom. Brazenly displaying her at breakfast the next day, I must confess to a frisson of delight.

The hotel offers a sense of genteel idiosyncracy, like sitting in front of a Monet canvas on a pot that refuses to flush. The walls are a mirage. One night I was privy to a diatribe between an angry American actress and her lapdog of a man. She unleashed her bile in a rising crescendo of 'Aye', I the victim, I the disrespected, I who married that schmuck. The poor old critter finally made a bolt for the door, only to be felled by an admonishment like rolling thunder. Hard to imagine the hunched, grey figure at the breakfast table, the object of such venomous desire.

The 'Fields of Vision' exhibition at the Musée des Beaux Arts was a happy surprise. One door opening onto a catwalk over warm dark water, a firmament of lights projecting your image a thousand times onto the walls of a magic womb. If I were still resident in Rouen, I would return each day to walk upon the water in more appropriate attire. A pink flamingo, a dervish whirling in a sea of silk scarves. Le Petit Prince floating serenely through the stars.

This summer Rouen played host to a 'son et lumière spectacle'; an interpretation of Monet on the cathedral walls. Light projected from the window where Monet once stood, first highlighting the Gothic darkness, then the lines of masonry and finally the dappled blobs we know as Impressionist art. Another shift in focus recreates the facade as an artists' palette, with a great splurge of blood on the cathedral doors. After that, the projections seem to lose their way, and the discordant urban soundtrack has a dispiriting effect. I stayed with the crowd for a second sequence, eyes tilted upwards, trying to fathom a higher meaning.

Wandered back through Dieppe with time to kill before the ferry, so popped into a bar in the 'Pollet' district. Just a few washed out faces eking out their glasses of 'pression' or 'pastis'. La patronne was surprisingly young and lively, blond, quite voluptuous really. Hard to imagine what kept her in this drab little backwater where noone in a lifetime had ventured beyond the town. All of a sudden she became quite animated, seeking the name of a chestnut brown flower. None of the residents could help her and she disappeared up a staircase in search of inspiration. Difficult to know what provided the answer to her quest; an internet connection is a millenium away. Probably the local wise woman who doubles as a midwife is stashed away in the attic. Anyway, she returned glowing, revealing the name of the plant: 'Le déséspoir de poètes'. Only the French could name a plant thus. Despair is a tangible feature of their life. In English schools children learn to write an essay with a beginning, a middle and an end. In France it's a beginning, a middle and a suicide pact. Round the corner there's another bar, 'Mieux ici qu'en face'. I've come to the conclusion that living in Brighton is better than over there. But these quirky episodes of French life have a quality all of their own.

Extract from the book, 'A Mule in Rouen-a discovery of Upper Normandy'
by Rob Silverstone
ISBN 1843861631
www.normandymule.co.uk