What you should know about mortgages in France

Mortgages or home loans (hypothèque) are available from all major French banks (for both residents and non-residents) and many foreign banks. The French post office also offers mortgages, but you must have been contributing to a plan or compte d’épargne logement for at least 18 months to qualify.

It’s possible to obtain a foreign currency mortgage, other than in euros, e.g. GB£, Swiss francs or US$.

Tip: If you need to obtain a mortgage to buy a home in France, you should shop around and compare interest rates, terms and fees (which can be very high) from a number of banks and financial institutions – not just in France but also in your home country. Bear in mind that mortgages in France are generally for a shorter period than in the UK and US, and therefore your repayments may be much higher.

You should be extremely wary before taking out a foreign currency mortgage, as interest rate gains can be wiped out overnight by currency swings and devaluations.

However you finance the purchase of a second home in France, you should obtain professional advice from your bank manager and accountant. Most French banks offer euro mortgages on French property through foreign branches in EU and other countries. Most financial advisers recommend borrowing from a large reputable bank rather than a small one. Crédit Agricole is the largest French lender, with a 25 per cent share of the French mortgage market. UCB is part of the French BNP Paribas group and specialises in arranging mortgages for foreign buyers (in conjunction with the Abbey building society).

Both French and foreign lenders have tightened their lending criteria in the last few years as a result of the repayment problems experienced by many recession-hit borrowers in the early ’90s. Some foreign lenders apply stricter rules than French lenders regarding income, employment and the type of property on which they will lend, although some are willing to lend more than a French lender. It can take some foreigners a long time to obtain a mortgage in France, particularly if they have neither a regular income nor assets there. Note also that it can be particularly difficult for a single woman to obtain a mortgage in France. If you have difficulty, you should try a bank that’s experienced in dealing with foreigners, such as the Banque Transatlantique (http://www.transat.tm.fr ).

It’s also possible to remortgage or take out a second mortgage on an existing property.

Interest rates can be fixed or variable, the fixed rate being higher than the variable rate to reflect the increased risk to the lender. The advantage of a fixed rate is that you know exactly how much you must pay over the whole term. Variable rate loans may be fixed for the first two or more years, after which they’re adjusted up or down on an annual basis in line with prevailing interest rates, but usually within preset limits, e.g. within 3 per cent of the original rate.

An alternative to a hypothèque is a privilège de prêteur de deniers (PDD), which is marginally cheaper but has certain restrictions (e.g. you can only take out a PDD at the time of purchase and may not take out a PDD for more than the purchase price of a property).

A quick comparison between the mortgages offered by the principal lenders can be made using Finance in France’s online ‘mortgage machine’ (http://www.financeinfrance.com ).

It’s customary in France for a property to be held as security for a loan taken out on it; in other words, the lender takes a charge on the property. However, some foreign banks won’t lend on the security of a French property.

French law doesn’t permit French banks to offer mortgages or other loans where repayments are more than 30 per cent of your net income. Joint incomes and liabilities are included when assessing a couple’s borrowing limit (usually a French bank will lend to up to three joint borrowers). Note that the 30 per cent limit includes existing mortgage or rental payments, both in France and abroad. If your total repayments exceed 30 per cent of your income, French banks aren’t permitted to extend further credit. Should they attempt to do so, the law allows a borrower to avoid liability for payment.

To calculate how much you can borrow in France, multiply your total net monthly income by 30 per cent and deduct your monthly mortgage, rent and other regular payments. Note that earned income isn’t included if you’re aged over 65.

As a condition of a French mortgage, you must take out a life (usually plus health and disability) insurance policy equal to 120 per cent of the amount borrowed. The premiums are included in mortgage payments. An existing insurance policy may be accepted, although it must be assigned to the lender. A medical examination may be required, although this isn’t usual if you’re under 50 years of age and borrowing less than €150,000.

A borrower is responsible for obtaining building insurance on a property and must provide the lender with a certificate of insurance. 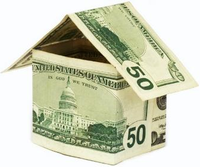 Mortgages can be obtained for any period from 2 to 20 years, although the usual term in France is 15 years (some banks won’t lend for longer than this). In certain cases mortgages can be arranged over terms of up to 25 years, although interest rates are higher and a mortgage must usually be paid off before you reach the age of 70 (in some cases 65). Generally the shorter the period of a loan, the lower the interest rate.

All lenders set minimum loans, e.g. €15,000 to €30,000, and some set minimum purchase prices. Usually there’s no maximum loan amount, which is subject to status.

If you fail to maintain your mortgage repayments, your property can be repossessed and sold at auction. However, this rarely happens, as most lenders are willing to arrange lower repayments when borrowers get into financial difficulties.

To obtain a mortgage from a French bank, you must produce your passport (or a copy) and those of any joint applicants and provide proof of your monthly income and all out goings such as mortgage payments, rent and other loans or commitments. Proof of income includes three months’ pay slips for employees, confirmation of income from your employer and tax returns. If you’re self-employed, you require an audited copy of your balance sheets and trading accounts for the past three years, plus your last tax return. French banks aren’t particularly impressed with accountants’ letters. If you want a French mortgage to buy a property for commercial purposes, you must provide a detailed business plan (in French).

It’s possible to obtain agreement in principle to a mortgage, and most lenders will supply a guarantee or certificate valid for two to four months (in some cases subject to valuation of the property), which you can present to the vendor of a property you intend to buy. There may be a commitment fee of around €150, but the deposit paid when signing a preliminary property purchase contract (compromis de vente) is protected under French law should you fail to obtain a mortgage.

Once a loan has been agreed, a French bank will send you a conditional offer (offre préalable), outlining the terms. In accordance with French law, the offer cannot be accepted until after a ‘cooling off’ period of ten days. The borrower usually has 30 days to accept the loan and return the signed agreement to the lender. The loan is then held available for four months in the case of a normal purchase; it can be used over a longer period if it’s for a building project.

Tip: French banks and other mortgage lenders sometimes withdraw an offer at the last minute, so it’s wise to have a provisional arrangement with another lender as a back-up.

There are various fees associated with mortgages. All lenders charge an administration fee (frais de dossier) for setting up a loan, usually 1 per cent of the loan amount. There’s usually a minimum fee, e.g. €350 plus VAT (TVA), and there may also be a maximum.

Although it’s unusual for buyers to have a survey in France, foreign lenders usually insist on a ‘valuation survey’ (costing around €250) for French properties before they grant a loan.

If a loan is obtained using a French property as security, additional fees and registration costs are payable to the notary (notaire) for registering the charge against the property at the bureau des hypothèques, which amounts to around 2.5 per cent of the amount borrowed.

If you borrow from a co-operative bank, you’re obliged to subscribe to the capital of the local bank. The amount (number of shares) is decided by the board of directors and you will be sent share certificates (certificat nominatif de parts sociales) for that value. The payment (e.g. €75) is usually deducted from your account at the same time as the first mortgage repayment. When the loan has been repaid, the shares are reimbursed (if required).

Note that if you have a foreign currency mortgage or are a non-resident with a euro mortgage, you must usually pay commission charges each time you make a mortgage payment or remit money to France. However, some lenders will transfer mortgage payments to France each month free of charge or for a nominal amount.

If you’re buying a new property off plan, when payments are made in stages, a bank will provide a ‘staggered’ loan, where the loan amount is advanced in instalments as required by the contrat de réservation. During the period before completion (période d’anticipation), interest is payable on a monthly basis on the amount advanced by the bank (plus insurance). When the final payment has been made and the loan is fully drawn, the mortgage enters its amortisation period (période d’amortissement).

If you have spare equity in an existing property, either in France or abroad, it may be more cost-effective to remortgage (or take out a second mortgage) on that property than to take out a new mortgage for a second home. Depending on the equity in your existing property and the cost of a French property, this may enable you to pay cash for a second home. There may be several advantages to remortgaging, including the following:

The disadvantages of remortgaging or taking out a second mortgage on an existing property include the following:

French lenders have traditionally been reluctant to remortgage, but new rules introduced in spring 2006 mean that ‘equity release’ mortgages should be available by 2007. There will be two types of ‘product’: a crédit hypothécaire rechargeable, which allows you to reborrow the amount you’ve already paid off on an existing mortgage, and a prêt viager hypothécaire, which enables you to release the ‘capital’ tied up in a property as a result of an increase in its value. Before taking out either type of mortgage, you must visit a notaire, who will warn you of the risk you’re undertaking!