Shakespeare in English in Germany

Being an expat means getting to explore new societies, customs and culture. Many people living abroad claim to miss out on the so-called 'high culture', mostly due to the language barrier. Now there is a solution. 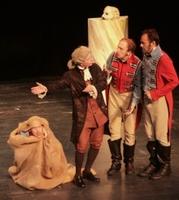 This summer The American Drama Group  Europe and TNT Britain will tour Europe again with their renditions of Shakespeare's famous plays. All spectacles will be performed in English. The performances will take place in European castles to bring out the magical power of Shakespearean' s writing.

The Castle Tour has been playing these signature shows since 1995. The plays are chosen according to the 'try to please everyone' policy and range from drama to comedy. They are reinterpreted to breathe in some of the fresh air into the well-known stories, while staying true to Shakespeare's style.

From June to September the tour will be in Germany, Switzerland, Austria, Scandinavia, Belgium and many others countries. It is a once a year opportunity for expats to come together and enjoy wonderfully well-played performances in English.

All of the plays have received rave reviews. "One of the most interesting developments on the current theatrical scene" (The Guardian). Visit ADG Europe  to get more information. Don't miss The Castle Tour, as it will be an event to remember!