Low unemployment despite the crisis

The great recession of 2008/2009 had a severely damaging impact on some of the world’s most powerful economies. However, the German labour market has been said by some to have experienced a miracle by maintaining an almost consistently low unemployment rate during this time.

Germany has the fourth largest industrial base and national economy in the world. Two thirds of all the jobs in the country are provided by small and medium-sized businesses, which also account for half of the country’s economic output. Most of Germany’s exports go to other European countries, placing Germany as the second biggest foreign trader, only after the USA.

The past labour market reforms boosted Germany’s position, resulting in enhanced job matching, increased work incentives and more flexibility in working hours. The benefits of these are obvious - Germany had the most stable labour market during the financial crisis. The highest employment rates and lowest youth unemployment rates in Europe were detected in Germany. 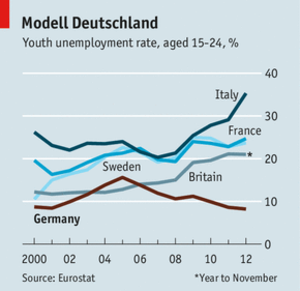 These reforms benefitted the German labour market by making it more flexible. Following on from this, part time opportunities were nurtured, small businesses could fire staff more easily, and the unemployed were motivated to seek jobs and quit using benefits. Aside from these reforms, Germany’s restricted growth in wages and active demand for exports played a major role in balancing and maintaining its stable labour market.

With the start of the recession, the German GDP declined 6.6% after it had peaked in the first quarter of 2008. Whilst other affected countries’ unemployment rates were rapidly increasing, Germany’s was, surprisingly enough, decreasing over the period between the first quarter of 2007 and the end of 2009. It only slightly rose from 7.4% to 7.9% in late 2008, early 2009.