Why learn German in Freiburg

The sunniest place in the country?

There is something about Freiburg that makes it impossible not to fall in love with – and this is especially true if you’re thinking of travelling there to study German.

What makes Freiburg so lovely? 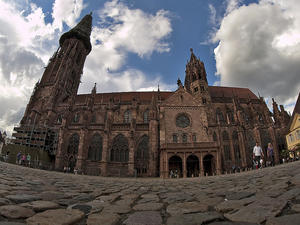 It could be the laid-back charms of its curvy cobbled streets set off by a wonderful backdrop of medieval architecture . Or maybe it’s the sound of water trickling through the bächle – the small streams which have diverted water from nearby rivers through the centre of town since the Middle Ages.

Its academic credentials are also impeccable. It’s a famous old German university town that has developed into a major commercial and intellectual centre of the upper Rhine region.

Of course, Freiburg’s loveliness could lie in the natural beauty that still exists in the city itself and is immediately accessible in areas such as the Black Forest and abundant vineyards which surround it.

Here are some more reasons why Freiburg is a great place to visit to learn German.

Freiburg’s academic credentials are second to none with the Albert Ludwig University of Freiburg established as one of Germany’s most renowned learning centres.

Freiburg is also home to a selection of very well respected language schools that offer courses at all levels for those wishing to learn, improve or master the German language. Further details for language schools here can be found at ESL Languages (www.esl-languages.com).

The progressive mind-set of Freiburg is nowhere more evident than in its commitment to the environment. One of the first eco-cities, Freiburg has invested heavily in sustainable technologies. The newly built neighbourhoods of Vauban and Rieselfeld have been developed and built according to the strict principles of sustainability.

When they’re not recycling, the citizens of Freiburg love cycling and this makes getting around the city and its surrounding countryside a real delight on the network of cycle paths that exist.

It’s easy to see why, green credentials apart, Freiburg has attracted a large number of solar industries. Freiburg is blessed with much more than its fair share of sunshine – which may explain the sunny dispositions of those who live there. Freiburg gets more sun than anywhere else in Germany.

Great base to explore Europe

Lying at a border triangle, Freiburg offers a fantastic base from which to discover much of central Europe. It has excellent connections via rail and road to Switzerland, Germany, Austria, the Benelux countries and France.

Freiburg offers it all to students – lively squares to wile the nights away, clean air, beautiful countryside, sun, a laid-back atmosphere and a springboard to explore Europe. Was will man mehr? (What more do you want?)