Greek national holidays can give you the best time in the world. There are endless lists of  special events which you can attend during your day off work. Here is a list of national holidays with a short overview.

New Year’s day (January 1st) is one of the most important days for celebrations. The New Year in Greece is not only celebrated as the first day of the year, but also as St. Basil's day.

You will see many people doing last minute shopping, and children playing on the street. It is normal that Greek citizens exchange gifts on the New Year instead of Christmas. The presents are delivered by Saint Basil, also known as Agios Vasilis, who is the Greek Santa Claus.

This Christian festival is celebrated on the sixth of January. It is a public holiday in many countries, and marks two important events in Jesus Christ’s life, according to the Christian Bible. The first event was when the three wise men visited Jesus, and the second event was when St John the Baptist baptized Jesus.

Though this feast is celebrated throughout the whole world, the Greek call it “Phōta” (Φώτα). Customs revolve around the ‘Great Blessing of the Waters,’ which marks the end of the traditional ban on sailing, as the winter seas are cleansed of the "kalikántzaroi". These kalikántzaroi are the legendary goblins who try to torment God-fearing Christians through the festive season.

During the Great Blessing of the Waters, a cross is thrown into the water and the men dive after it in the hope of retrieving it for good luck.

Clean monday goes by many names including: Pure Monday; Shrove Monday; Ash Monday; Monday of Lent or Green monday. It is a day when families go outdoors for family activities and all Greeks enjoy mountains of traditional food. It is at the beginning of the 7th week of the year, just before Easter Sunday. 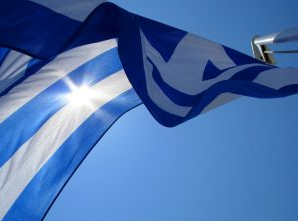 March 25th 1821 is a very important day in Greek history. Bishop Germanos of Patras raised the Greek flag at the Monastery of Agia Lavra in Peloponnese, and yet another revolution against the Turks began.

It goes without saying that independence day is very important for Greek citizens, and they celebrate it to the full. In the capital, Athens, the day is celebrated with a large military parade through the main street in front of the Parliament building.

In Greece, Good Friday is considered a public holiday. Nearly every business and shop will be closed as well as most of the museums. Keep in mind that the atmosphere of the day can be solemn, and  some even observe Good Friday as a day of mourning to remember the events leading up to Jesus Christ's crucifixion.

Easter is the country's most important religious festival and is the most holy of all of the Greek holidays. Many of the day’s traditions bond the different generations together.

May 1st is International Labor Day. In Greece you will see many parades and other festivities. Every public institution will be closed, and this is one of those days where traffic can be an absolute disaster.

Fifty days after Easter, Holy Spirit monday (also known as Whit Monday or Pentecost) is celebrated. It is a religious holiday which marks the descent of the Holy Spirit to the disciples. Most Greek people use this holiday as an opportunity to have a short holiday. Many will go to visit other islands for a nice, relaxing day.

Ochi Day (sometimes spelled as Ohi Day) is one of the festivals which best illustrates the pride of the Greek citizens. It is celebrated throughout Greece, and people commemorate the fact that Greece rejected the ultimatum made by Mussolini on the 28th of October, 1940.

All major cities have military parades, and coastal towns even offer naval parades (amongst other celebrations). Be prepared for a beautiful array of colours and activity as everyone celebrates this magnificent day with Greek flags flown proudly across the country.

Normally, you will have a holiday period of 12 days in Greece. Most people decorate their houses quite late, just a few days before Christmas. Even though most people exchange gifts on New Year’s day, people will also buy gifts for each other during Christmas. Make sure that you try the Christmas sweets such as melomakarana and kourabiedhes!

Also known as the Glorifying of the Mother of God, this is a celebration dedicated to Mary, who was, according to Christian belief, the mother of Jesus (in Greek, she is known as “Theotokos”). In general, this day is considered a holiday because it's the day after Christmas, just like Boxing Day in other countries, which is also the 26th of December.