How to find your dream home

Finding the right place to live is top of the list of priorities when you move country. Despite the time pressures (especially if you are living in a hotel and need an address to sort out the documentation etc) it is worth thinking carefully about what you want.

The following advice is suggested by seasoned ex-pats:

John had been transferred to Northern Italy with his wife Carol and daughter Becky (18 months). Carol, who also works for a multinational company, had managed to organise transfer to their Milan office with the same timings as John’s move. This was great as they could move together and independently follow their careers.

Neither wished to live in a big city so they got the map out and identified a couple of potential smaller towns that were still within reasonable driving distance of work. The Italian companies agreed to give some help with finding accommodation (suggesting agencies, helping with translations, legal) but the major work would have to be done by Carol and John. Two months before their move they faxed a simple brief (translated into Italian by the company) to a couple of agencies, telling them that they would be in Italy in a particular week in July and asking them to organise a list of apartments to view. The brief simply stated that they wanted an unfurnished 3-bedroom apartment with largish living room and kitchen, 2 bathrooms, within easy walking distance of the centre of the town for a contract length of about 3 years. Additional extras (advantageous but not critical) were: garage, balcony, and park nearby. The agencies were told that they would not view any apartments that did not meet the brief.

As they would both work they also needed to find a nursery for Becky. A colleague in Italy recommended sending Becky to the state run nursery (asilo nido di comune) as they have a far better reputation and facilities than private nurseries (which surprised John and Carol). They arranged to visit a state run nursery and private nursery in the 3 towns that the agencies had organised apartments to view.

In July Carol and John left Becky with her grandparents and came to Italy for 4 days. John’s company agreed for someone to act as guide for them and they visited the various apartments and nurseries. They spent some time looking at the facilities in the area (town centre, parks, sports centres, nearness to motorway). On the basis of this they chose an apartment and registered Becky at the local state nursery.

There were 2 major problems to be solved:

As they had a small child they were desperate to have accommodation organised before they came to Italy and without a nursery one of them couldn’t start work immediately. In the middle of all the discussions they also learned that Italy more or less closes down during August with everyone on holiday and this is a terrible time to move. 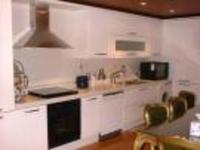 They then worked out the following solution: The landlord agreed to pay for the built in kitchen as long as the rent was increased slightly. The kitchen would belong to the landlord at the end of their stay. Carol and John chose the type of kitchen they wanted during their 4-day visit to Italy and it would be installed by the first week in Sept. Carol and John’s move was postponed until after the holiday period when both the flat would be ready and Becky could start at nursery.