Although St. Petersburg may be overshadowed by Moscow in terms of political and economic importance, it certainly trumps its older brother in terms of beauty.

St. Petersburg is a geographically fascinating city, having been raised from what was effectively a swamp, the city now sits on a series of over one hundred islands. This means it can be hard to go long without crossing one of its many beautiful bridges.

Despite being much younger than Moscow, having been founded in 1703 by Peter the Great, this isn’t to say it’s not rich in history.

Also, thanks to its proximity to the sea, it doesn’t have such extreme weather as much of Russia does. However, its very northerly location means it does of course get cold, with temperatures often dipping to -10°C during winter. Summers can reach  30°C but remain very humid, so it’s a good idea to come prepared with waterproofs, even in these warmer months.

Nevsky Prospekt serves as the hub of the city around which most shopping and nightlife spots congregate. It’s lined with marvellous buildings such as the arching Kazan Cathedral, which is named after the significant Russian icon of Our Lady of Kazan. Overall, it provides a great place around which to base your St. Petersburg exploration. 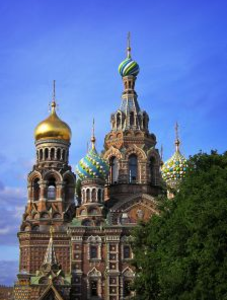 Just off of this avenue is the remarkably intricate and stunningly beautiful Church of Our Savior on the Spilled Blood (Church of the Resurrection of Christ). This church was built on the spot where Alexander the Liberator, the man responsible for freeing many Russian peasants from serfdom, was assassinated. The array of onion domes that adorn it, which vary between shining gold and complex multi coloured patterns, show from the outside that it’s most certainly a fitting tribute to the great man.

However, it’s arguably the inside which really steals the show, with the whole interior being lined with detailed mosaics of overwhelming beauty. In fact, it’s thought that the church contains the largest surface area of mosaics of any church in the world. What’s more, you can even see the original cobblestones of the road where the anarchist bomb which killed Alexander II hit.

Another staggeringly impressive sight of St. Petersburg is the Hermitage Museum, which contains over three million artefacts and works of art from around the world. Within this collection, it claims to house the largest number of paintings of any museum or gallery on the planet. Best of all, it’s not only the objects contained here which are fascinating, but also the buildings which house them. Most impressive of all of these is the Winter Palace, once the official residence of Russian monarchs, prior to its storming during the Bolshevik Revolution. It’s good to note that entry is free on the first Thursday of every month.

Next to the Neva River you can find the famous Bronze Horseman statue, depicting Peter the Great, atop a mighty steed. The rider sits on an enormous block of granite carved into the shape of a cliff, from which he leads Russia forward, whilst stepping on a snake symbolising his enemies. The Bronze Horseman statue is the subject of Pushkin’s famous poem, in which the statue comes to life in order to defend its honour.

Getting to and from St. Petersburg

The city is served by Pulkovo Airport, in which Terminal 1 deals with domestic flights and Terminal 2 with international ones, They’re located 17 km and 20 km south of the city, respectively, and are accessible by shuttle buses that run constantly to and from Moskovskaya metro station.