Enjoy the tripe, beer and wine

Traditional South African food consists of a variety of meat and vegetables, which are rich in colour and taste. When dining here why not wash down all the delicious food with some African beer or world renowned wine? Dig in!

South African cuisine is known to be very colourful and varied. Generally, the food reflects different influences from the local culture and worldwide destinations. There are numerous restaurants and roadside cafes that specialise in traditional cuisine all over the country’s cities and big towns. Food in South Africa tends to be very reasonably priced, and the roadside cafes and stands offer even cheaper food. If you’re wondering where to eat, a good tip is to go wherever the locals go - they usually know where the best food is!

Historically most dishes have been prepared over an open fire, so meat in South Africa tends to be either grilled or stewed. The most common dishes that you must try include pap, tripe, morogo, chakalaka, boerewors and amadumbe (a mash of sweet potato and peanut).

Vegetables such as carrot, beetroot, pumpkin and cabbage are very often used to compliment the meat. 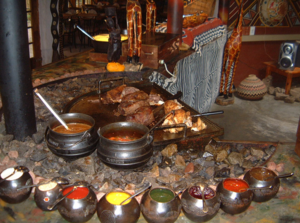 Pap is a very traditional type of porridge, often served as a side dish, or served with a side dish of green vegetables, and often spiced with chili.

Tripe, usually served with a side dish of potatoes and onions, is well loved and considered a delicacy by the locals.

Another highly prized dish in South Africa is morogo, which is a type of wild spinach. It is usually served mixed with tomato and butter-braised onions, or often mixed with maize porridge.

Chakalaka is made of green peppers, sliced onion, grated carrots, vinegar and chili and is a common side dish.

Boerewors roll is a type of a spicy fatty sausage and is one of South Africa’s very tasty meat dishes. It is South Africa’s version of the American hot dog - normally sold at roadside stands, it is chargrilled and served in a bun.

In addition to all these traditional specialities, a variety of seafood dishes can be sampled around the coastline of South Africa. Mussels, grilled fish and lobster, fish stew and pickled fish (traditional Cape Malay restaurants’ pride) are some of the foods you should try.

South African cuisine is very rich and varied in taste, and colourful in ingredients, however if not accompanied by traditional African beer or the world renowned Cape wine, your experience has not been complete. 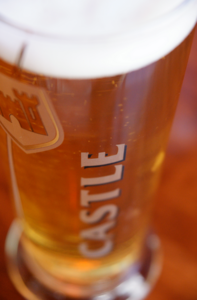 South Africa is said to be the most beer consuming country on the continent. Beer is traditionally brewed from local grains and is a main beverage at ceremonies such as weddings. In contrast to European beer, South African traditional beer used to be cloudy, unfiltered and low in alcohol content.

With the development of mines in South Africa and increasing urbanisation, women moved to cities as well as men, and started brewing beer for the male workforce. Some informal bars are still owned by women (known as shebeen queens) due to the deep tradition of women brewing beer.

Today, most beer manufacturers make beer according to European standards, yet you can still try traditional African beer in some rural areas. One of the most popular beers is Carling Black Label, brewed and sold by South African Breweries. Lager is much more common than ales, as is usual in warmer climates. Real ale is mostly imported, though microbreweries are increasing in number across the country. 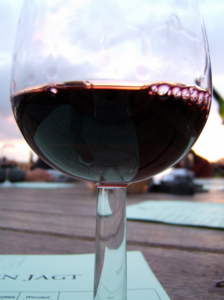 The Cape province is famous all over the world with its 350-year wine producing tradition. It is said to combine the best of both worlds in terms of wine - the tradition of taste of the “Old World” wine such as in France and Italy and the “New World” wine of Australia and California that please the modern consumer’s tastes.

Down in South Africa, where the climate and topography are perfect for wine production, over 105,000 hectares are planted with wine grapevines. They are used for winemaking from mainly chenin blanc, sultana, colombard, chardonnay, cabernet sauvignon, pinotage, and shiraz grapes.

It is very difficult to decide what wine to go for when in South Africa, considering you have a choice of 800 wineries. Here are a few suggestions of renowned wines that you can’t go wrong with: Vergelegen, Meerlust, Rust en Vrede, Kanonkop, Klein Constantia, Hamilton Russell Vineyards, Thelema Mountain Vineyards, Simonsig, Rustenberg, or Cederberg.