Measures of Expatriation with Vahni Capildeo

An interview with the Forward prize winning poet

Following the success of her latest collection, Measures of Expatriation, we interviewed Trinidadian-born poet Vahni Capildeo about what it means to be an expat, her Caribbean roots, and if there’s such a thing as British identity.

You were born in Trinidad but moved to the UK in 1991. Why did you become an expat? 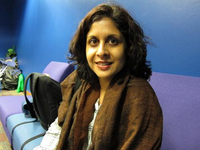 I went to Oxford as a student in 1991. My father had been there, and I was following an almost fairytale notion of ‘being away’. Much too early, I began a serious personal relationship, and remained in England. It was easy not to notice how many years were passing, because I was also committed to pursuing research degrees in Old Norse literature and translation theory. I was enjoying the new experience of being able to walk around freely as an independent woman and get to know cities and countryside in my bones.

Your latest collection, Measures of Expatriation, discusses a major expat dilemma: our connection to ‘home’. Why did you feel it was important to explore this?

I didn’t really set out to explore a connexion to ‘home’, so much as to write a book that felt true to my experience. For example, I’m very aware of the living ghosts of histories and landscapes in my surroundings. Once you are aware of that, it’s impossible to see human beings as fixed. We do not just lose or own or mourn for homes. We also make homes, fall in love with places, even feel most at home in the journey. I’m very sad when people don’t see that what you identify as ‘home’ can be a matter of passion and choice, not just the accident of birth in a place.

Do you feel Trinidad or the UK has affected your work the most?

It’s hard to say, because they are so intertwined. Trinidadians were classed as ‘British overseas citizens’ until Independence in 1962. People move between these islands. Empire and its aftermath, markets and education, have also produced a reflex of Britain in Trinidad’s collective imagination. So Trinidadians (regardless of ethnicity or travels) have part-British imaginative heritage. Though perhaps this does not work so much the other way. Ashis Nandy, the Indian thinker, writes beautifully about the life in such ideas of the ‘non-West West’. My childhood memories are primarily Trinidadian; learning to swim, losing teeth, being made up for Carnival. However, it’s also true that I did a lot of growing up in Britain and had many of my ‘firsts’ there.

Do expats have a different way of viewing the world which could affect how they create art?

As you can tell by now, I resist generalizations… For me, an artist needs to be uncompromising with themselves. As an expat, if one is privileged, it’s possible to live in a bubble, which is rosier in some aspects, more fearful in others, than a clear-eyed artistic vision would need. On the other hand, an adventurous or less-privileged expat of course would question themselves when they encounter difference. This self-questioning can produce very interesting art: art which encourages people to see new things – or to see things anew.

How would you suggest an expatriate can deal with feelings of displacement?

I’m not sure that as a poet I can offer solutions. The things I say or do, as a ‘personal person’, are fixes for myself. What the poetry does is more complex than anything I can say personally. Though I do find that people who can feel displaced, yet continue being humane, are more fun and less scary than people who feel defensive or possessive about their homes. There’s more future in that.

You write, “language is my home”: how might these words act as a comfort for expats?

It’s important to remember that not all poets use ‘I’ and ‘my’ in the same way. In my poems, I’m not necessarily bearing witness to my personal experience or trying to speak as my authentic self. These poems are thought experiments as well – attempts to channel other voices or try out ‘what if’. To imagine. To dream. To analyze. To empathize. Comfort in this line might be in the thought that something shared yet intangible – language –cannot really be taken away (unless the person is terribly physically and psychologically damaged), even if it is banned or censored.

As someone who has lived in the UK for over 20 years, do you have a good idea of what it means to “be British”, and is there such a thing?

I have learnt the living reality of there being four nations in the United Kingdom. I have begun to appreciate the balance of the older, not to say indigenous, cultures here. I have also been shocked by the comparative blindness to imperial history and its ongoing effects, which I’d have hoped would create more of a sense of global interconnectedness as a ‘British’ condition.

Do you think expats/migrants ever become fully integrated in their new culture or is there a part of them that is always distinctly ‘home’? And could this differ between the labels of expats and migrants?

It’s give and take. People change the culture and the culture changes the people. Often, points of connexion are found that nobody would have predicted. ‘Expat’ is a word I’d find it difficult to identify with. When I was growing up, it usually referred to richer immigrants who had a tendency to keep to themselves and might leave after a few months, or decades. I find the shift to the word ‘migrant’, rather than ‘immigrant’, worrying. It sounds like how the movement of animals is described. The word ‘migrant’ erases these people’s possible desire to make a home, or to feel that they already have a home in the place to which they are trying to go. It also erases our sense of their individuality and depth, as people with a homely inheritance in another history.

You can purchase Measures of Expatriation by Vahni Capildeo here