Public schools in the US

There isn’t a federal government controlled or funded school system in the US. Publicly-funded state schools (public schools) are the responsibility of individual state departments of education and are funded largely from local and state taxes with some federal funds.

Practices and policies regarding education (public and private) vary from state to state, where education is by far the largest area of expenditure, averaging around a third of total spending. State boards of education determine education policy in accordance with state laws.

Each state’s department of education is controlled by an elected board, headed by the superintendent of public instruction or the state commissioner of education. Board members are elected by local residents or appointed by the state governor and usually serve from two to six years. The board is responsible for setting policy relating to educational affairs such as the allocation of state and federal funds, certification of teachers, provision of textbooks and library services, records and educational statistics, and setting and enforcing the term of compulsory education.

The American public school system has an unusually high degree of decentralisation; i.e. schools are run largely by local authorities. Each state is divided into school districts (a total of over 16,000), many of which are the size of a city or county. Each district is governed by a superintendent and a locally elected school board (or board of education), usually with five to nine members. Working within the policies established at state level, school districts collect taxes, construct buildings, decide instructional policies, hire teachers, purchase equipment, arrange school terms (semesters) and holiday periods, and generally oversee the day-to-day running of schools.

The superintendent of a school is responsible for executing the policies established by the local board of education. Together with the board, the superintendent prepares the school budget, determines the level of taxes (usually property taxes) needed to finance the school programme, employs teachers and other school personnel, provides and maintains school buildings, purchases equipment and supplies, and provides transport for students who live beyond walking distance from school (many school districts provide school buses).

Teacher qualfications and educational standards in the US

Teacher qualifications and standards vary from state to state. All states require teachers to have a licence or certificate to teach in public elementary and secondary schools, although the actual requirements for teacher certificates are set by state education departments. All states require a bachelor’s degree for teaching elementary grades. Most states demand a bachelor’s degree as the minimum qualification for teaching in secondary schools and a few require five years’ study or a master’s degree. Teachers unfortunately don’t enjoy a high status in American society and even college and university professors don’t receive the respect accorded them in many other countries. Low salaries and lack of status have led to an increasing shortage of teachers in many areas and the hiring of foreign teachers.

Until the ’60s, public education in many (mostly southern) states was officially segregated, with blacks (African Americans) and whites attending separate schools. Desegregation heralded the controversial (particularly to whites) policy of ‘bussing’, which entailed transporting children by bus from one neighbourhood to another in order to balance racial groups (or achieve integration). This resulted in the bussing of both black and white children away from local schools and went against the long-established tradition of neighbourhood schooling. Although public schools are now integrated and officially blacks have equal educational opportunities, much education is in fact still segregated. 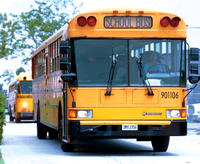 When bussing was introduced, many middle class whites simply abandoned the inner city schools (‘white-flight’) to blacks and moved to affluent suburbs where blacks were rare, or alternatively sent their children to ‘white-only’ private schools. However, although desegregation can hardly be hailed as an unqualified success, it has succeeded in narrowing the education gap between blacks and whites, and has reduced the high school dropout rate among blacks. Whereas in 1971, 23 per cent fewer non-whites than whites completed high school, the difference is now just 5 per cent. Blacks (and other minorities) are also attending colleges and graduate schools in greater numbers, although the percentage remains far lower than for whites. However, education opportunities for blacks (and other socially disadvantaged groups, such as Hispanics, native Americans, Asian-Americans and poor whites) remain woefully inadequate, and even when they’ve a superior education, it isn’t necessarily reflected in increased employment opportunities.

Many school districts question whether bussing is necessary and would like to end it. Many people believe it would be better for children to attend local schools, rather than spend up to two hours a day on a bus. Despite bussing, ‘segregated’ schools are the norm in the US (particularly in cities) and the number of white pupils attending schools with black students is falling rapidly throughout the country.

Public education in the US has been in turmoil in the last few decades, partly as a result of years of experimentation and a neglect of the basics, such as reading, writing and maths (math). During the last ten years, one of the most important issues in American education has been curriculum reform and a return to the proven traditional methods of learning. The emphasis on the basics was reinforced in the ’80s by a realisation of the need for training or orientation in technology-related fields such as computer science and communications. Traditional courses in science and the humanities have also been re-emphasised. In recent years, an increasing number of states and cities have radically altered the way they manage, finance and measure their schools. They’ve also redefined what children should know and how they should be tested, and have given new powers to principals, teachers, parents and students.

One of the most controversial issues in the last few years has been the ‘privatisation’ (or privatisation of management) of public schools, where outside contractors have been hired to manage schools. Initial results are encouraging, with better maintained and equipped schools, more motivated teachers, higher morale, and pride among pupils and teachers, all of which have helped raise academic standards. In some states, public schools are supported financially by local communities. There’s nevertheless a general lack of funding in American schooling, highlighted by decaying school buildings for which the repair bill has been estimated at over $80 billion.

This article is an extract from Living and Working in America. Click here to get a copy now.