The most attractive countries for expatriates

When it comes to identifying the most popular expatriate destinations, there are various indicators such yearly migration, quality of life and salaries that can be taken into consideration.

The number of expatriates moving to a certain country should be good indicator of a country’s attractiveness. However, this figure does not necessarily correspond with the quality of life for expatriates in this country as much migration is motivated by economic opportunity. Balancing short-term economic gain against varying levels of comfort living in another country is a key decision point for many expats. 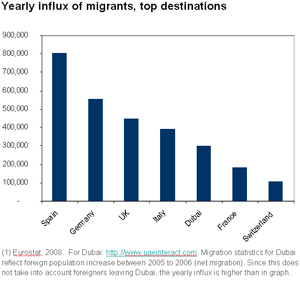 When it comes attracting expatriates, Spain is leading the ranking of worldwide expatriate destinations. In 2008, the country welcomed almost 800,000 foreigners, followed by Germany and the UK (Eurostat, 2008). In 2008, expatriates already accounted for 11.4% of the Spanish population, and this number is expected to increase to some 20% in the future. However, the worsening economic outlook in Spain points to a reversal in these figures so the picture could change rapidly over the next couple of years.

When it comes to quality of life, however, the picture becomes more complicated. According to the HSBC Expat Explorer survey (2008), there seems to be a very strong difference between the subjective “experience” of expatriates living abroad and the more objective criteria like the standard of living.

The worst countries in terms of expat experience are the United Arab Emirates and China, where most expatriates find it extremely hard to integrate into local society or make local friends.

However, when it comes to “hard facts” such as financial wealth, accommodation and luxury, the picture changes drastically. On these criteria, the most attractive expatriate destinations are Singapore, followed by the United Arab Emirates and the United States. The highest expatriate salaries are paid in India and Hong Kong, where almost half of expatriates earn more than £100,000 (~€120,000) per year.