Buses versus Trains in China

Advice from an experienced travaller

To reach the cosmopolitan city of Hangzhou, always it is best to experiment the different transportation systems. Just to get over the initial shock! 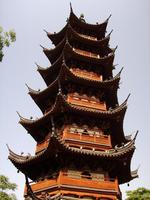 My experience takes place in the wonderful city of Shaoxing, where I had tried the bus system and from the Eastern Bus Station I can get a transport in a nice cool motor coach for 24 Yuan. Now going into Hangzhou it’s an absolute treat. One goes for the distinctive pleasures of a Haagen Daz ice cream, Starbucks, a Guinness from the barrel for 50 Yuan at the Shamrock bar or a distinctive red-Spanish wine and enjoying the shopping that one misses inside a smaller city. Sorry about the commercialism and even it’s commercialised, there is that spark that pulls you in the go and have a day! But there is more than the Westlake, further to the east, there are the canals and waterways.

When a friend asked me to try the train service for 12 Yuan, I said why not! A fatal mistake, in a country that everything runs behind or too ahead… First of all, getting to the East Railway Station was a hassle. Believe it or not, nobody knew the way to the service station. They thought it was the bus terminal, even when the ticket was written in Chinese. We took from Shaoxing the bus K 003, big
mistake, the routes had been changed for that particular weekend. Usually to the Railway Station the route is number 7. We had a boarding call for 8:23 a.m., nearly missing the train. However, to our advantage, my friend whom had purchased the tickets had purchased them with the wrong date on them.

So between bus and taxi fair, we arrived at the station with only five minutes to spare. Then the personnel would not allow us in, so we had to change the ticket to get on the train. So they told us to wait for the next one. We said of course not! After all this suffering for nothing; therefore, in the end, we still took off ‘technically’ on time, at 8:35 a.m. We rode standing-up for the next 50 minutes. That’s okay, we still made it and we were happy! What else can be said? 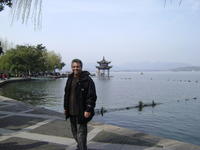 As we crossed into Hangzhou, I noticed the river and that was my signal that we were soon to arrive. My friend was insisting that we have a ways to go, but I am sure we must be in Hangzhou. Yes, we nearly stayed on the train in direction to Shainyuan. Luckily, I decided to ask and we had to literally run out, as the doors were closing. At the station, the only sign identifying Hangzhou was to the extreme corner, Hangzhou East barely noticeable to the human eye. So once there, we met with a friend and took the K 105. Off we went on the adventure.

Nice bus to really go a ride into downtown, it takes about an hour, but if in no rush, it is pleasant enough. For 2 Yuan you get the best panoramic view of the city. Travelling mostly from east to west of the city. By the end of the day, since this was train day, I decided to take the K 900 back. It is a way to the Hangzhou Central Station, different than Hangzhou East. It was a about a 30 minute ride into the Railway Station. You can also take the number K 49, whichever bus arrives first.

The Station is clearly noticeable from the road, but this is China, always an adventure and you must keep on your toes! Here, since this is the Main Station, the train to Shaoxing will cost one Yuan more, just about 13. And there are never guarantees you will have a seat or get on, and maybe the travelling is standing-up amongst a crushing crowd. The train was delayed by an hour and I had to push and shove with everybody else to get on, barely getting a seat. This train ride took even longer than the first. I was on the train for one-hour-and-fifteen minutes.

In conclusion, will I repeat this adventure, honestly no! I prefer the bus system from Shaoxing to Hangzhou. Quicker and faster way to get around without the hassles, the buses are comfortable and with air conditioner. The ride is the same time as the train or even shorter, usually between 50 to 55 minutes. Buses run every 30 to 60 minutes. It arrives [from Shaoxing] at the main depot at the east of the city of Hangzhou. You can still take the K 105 into the City Centre and back, to your preference. And in the end, all expatriates go to Hangzhou for the simple treats and pleasures that life has to offer. The only thing via train I would like to try next is Beijing and I will be taking their fastest train, the D version. It will get me just under 13 hours into the nation’s capital from Hangzhou. Fast, comfortable, hassle free! That is the way to travel, even when it can cost a little more. Will be reporting soon on the next adventure…