From flying kites to sleepless nights

The incredibly friendly and lively spirit of the Colombian people makes for some of the greatest festival atmospheres on the planet. All of the dancing, singing and enjoyment that goes on is truly infectious; you can’t help getting involved in the action.

The country’s rich history means it has an awful lot to show off at these events. As such, festivals in Colombia offer a great chance to soak in some culture and have a great time whilst doing it. 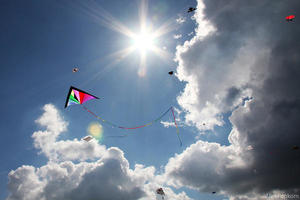 The strong winds that come to Villa de Leyva every August usher in the annual Wind and Kite Festival. It takes place over one weekend, with different types of kite dominating the skies each day. The Saturday is reserved for smaller artisan and amateur kites, which means its a great opportunity for kids to get involved in the action. Sunday is when the heavy artillery comes out and the competitions get serious. There are a variety of different categories including giant kites and team flights. All of this takes place against the backdrop of one of Colombia’s finest and best preserved colonial towns.

Despite being the second biggest Carnival  on the continent (after the infamous Rio Carnival), this event tends to be unfortunately overlooked by tourists. The main procession of the Batalla de los Flores (the Battle of the Flowers) sees the city explode with the colour of amazing costumes, elaborate floats and impressive dance troops. On top of this there’s plenty of street parties, dancing and drinking found all over the city throughout all days of the carnival.

Every two years around March a huge array of theatre companies descend on Colombia’s capital. During the festival roughly 800 performances are held not only within theatrical venues, but also throughout the streets of Bogotá. Ever since the first Iberoamerican Theatre Festival  in 1988 the event has been constantly expanding. At last count it played host to around 100 theatre companies from across the world in addition to 170 from within Colombia. The shows range from classic performances to puppets to dance, and anything in between. 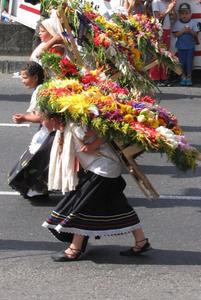 The huge scale of this event makes it easy to see why its one of Colombia’s most famous festivals . It takes place from late July until early August, culminating with the main parade on August 11th. On this day the campesinos (peasants) parade through Medellin carrying baskets full of beautifully bright flower arrangements on their backs. It truly is a magnificent sight to behold. Along with this, the 13 day festival includes a vintage car parade, a horse parade and parrot exhibitions. It happens at a perfect time as August tends to be Medellín’s warmest and driest month, however weather is always relative in a place dubbed The City of Eternal Spring.

The Bambuco Pageant and Folklore Festival

This annual event officially emerged  in 1960 from the celebrations of the Feasts of St. Peter and St. John. Every year around June 29th the city of Neiva explodes with music, dancing and parades celebrating the folkloric history of Colombia. Along with this is the beauty pageant in which women from each region of the country go head to head in dancing, beauty and general knowledge rounds. The winner is then crowned the National Bambuca Queen, quite a title in a country that’s internationally revered for its beautiful women.