Gems of the Colombian jungle

The jungles of Colombia tend to be thought of internationally as no go zones, thanks to the infamous guerrilla activity that goes on there. However in reality, the situation has vastly improved over the last decade or so, and much of Colombia is now safely accessible to tourists.

This opens up an opportunity to visit many incredible sites hidden deep within the jungle. Here are five of these gems. 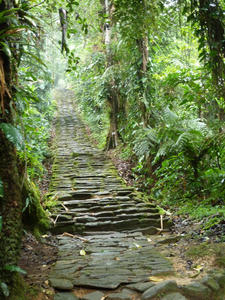 This ancient indigenous settlement is in many ways a lesser known cousin to Machu Picchu. Its stone terraces were built in 800 AD, abandoned some 400 years ago and not rediscovered until 1973.

This short modern history and connotations of guerrilla violence in the area means it hasn’t become commercialised to the same extent as Machu Picchu. However, security in the area has come on leaps and bounds, and as such, La Ciudad Perdida  has worked its way onto the tourist trail. The fact that it remains much more of a backcountry option is what makes it so attractive. Although the 4-7 day trek isn’t easy, it’s most certainly rewarding.

Along the route accommodation is in hammocks that hang from roofs of open air huts, providing an amazing opportunity to get in touch with nature. The journey through dense jungle is punctuated by wonderful waterfalls, magnificent wildlife and encounters with the indigenous people of the area. This leads many to believe that the journey is just as marvellous as the destination.

The site itself is reached by ascending 1,200 moss covered stone steps. Once there you are free to explore the 170 or so stone terraces that made up what was once the economic centre of the region. The fact that a large amount of the settlement still remains undiscovered and hidden away by jungle only serves to add to the awe of mystery surrounding it. 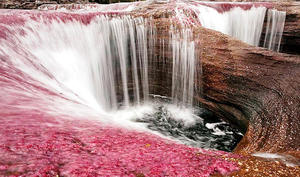 Also known as ‘The River of Seven Colours’, this magnificently coloured waterway truly is a sight to behold. Although it spends most of the year as a reasonably pretty, albeit unremarkable river, between late July and early December it is transformed into a unique natural phenomenon.

Thanks to a species of plant called Macarenia clavigera found on the river bed, it explodes with colour and glows with a diverse selection of vibrant hues. The red is most prominent, however there’s also blues, yellows, greens and a million shades in between.

Up until fairly recently guerilla activity made this area of Colombia a dangerous place, however it’s now a great deal safer. Whilst Caño Cristales is still somewhat remote, there are several tour operators that offer day trips from the nearest big settlement of La Macarena. 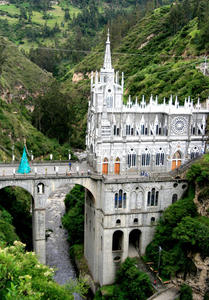 The location of this neo gothic basilica strikes you just as much as the beauty of the church itself. Nestled in a lush green canyon, at its its highest point it rises 100 metres above the Guáitara River that flows underneath it. Folklore tells of a lady and her deaf-mute daughter traversing the valley, when all of a sudden the daughter was able to speak as she pointed to an apparition of the Virgin Mary that had appeared. This miracle made the site popular for pilgrimages and led to a series of shrines being built. It was between 1916 and 1949 that the awe inspiring church positioned there today was constructed. Even ignoring its position, the wonderful stone colouring and ornate carvings make the basilica a true wonder.

Spread along Colombia’s Pacific coast, impenetrable jungle means the Chocó region  is only accessible by air or boat. This difficulty of access takes it off the beaten path and only adds to the numerous reasons to visit. The primary allure of this region is its unspoiled beauty; it offers hundreds of miles of untouched coastline served only by basic hotels and small settlements. This provides a perfect opportunity to completely and utterly escape from everything.

However, this isn’t to say that things don’t get exciting in Chocó. Between the months of July and October the region becomes home to hundreds of humpback whales, which come to the region to give birth and raise their young. During the 4 month period that the whales grace this Colombian coastline, the best places to get involved with the action are the beaches of Bahía Solano and Nuquí. In both of these areas, hotels are able to offer the boats and expertise necessary to get incredibly up close and personal with these enormous mammals.

A large chunk of the southeast of Colombia is covered by the world’s most revered rainforest; the Amazon. Although world famous, no amount of nature documentaries can prepare you for quite how vast and teeming with life this area is. Here you can find jaguars, crocodiles, tapirs and turtles along with countless other species. The best way to get here is by flying to Leticia, a settlement which also tends to act as base camp for visitors to the region. From here you can explore the jungle as well as boat up and down the river to reach assorted wonders.

A notable nearby site is the incredible Monkey Island. Back in the 60s it was owned by an American, who captured thousands of monkeys to keep in a private nature reserve. Although he was eventually arrested for drug smuggling, the thousands of monkeys remain. They’re surprisingly brazen and even willing to be fed directly out of visitors hands, making for an incredibly fun and quirky experience.