With just under 700,000 registered vehicles in Dubai, and with more than a million cars on Dubai’s roads each day, the car is the most preferred method of transport in the emirate.

The road network around Dubai consists of between one and five lanes of traffic in each direction. Blue, green or brown signposts are written in both English and Arabic and, as the network is constantly expanding, road works are everywhere. Although many roads have names, only the well-known thoroughfares, such as Sheikh Zayed Road (the main highway between Abu Dhabi, Dubai and Sharjah) are generally referred to. Other roads have unofficial names and it’s the norm for people to navigate by landmarks and location maps.

Public transport is currently limited to buses; there are no railways yet, although construction of the Dubai Light Rail project has started and is set for completion in 2009. Including plans for up to seven monorails around Dubai that will link the railway to the Palms, DIFC and the City of Arabia, among others, future plans include Emirates Railway, a rail track from Abu Dhabi to Ra’s al-Khaimah.

Taxis are aplenty and fares cheap. Water taxis – or abrat (singular abra) – are a traditional (albeit motorised) way of getting from one side of the Creek to the other. A one-way fare is still just
50 fils, although there are plans to raise it to Dhs1.

Traffic congestion remains a huge problem in Dubai. So much so that the emirate’s first toll gate system, Salik (meaning ‘clear’ in Arabic), opened in July 2007.

Stretching from Garhoud Bridge to the Mall of the Emirates’ junction along Sheikh Zayed Road, motorists have to purchase a pre-paid card and affix a machine-readable sticker to their windscreen. As they drive along the route, they’re charged Dhs4 each time they pass an electronic toll, up to Dhs24 a day.

Each year, the number of deaths and serious injuries from road accidents increases, despite police efforts, including initiatives where they reward motorists who drive safely; employ mobile radar devices and increase traffic patrols. Statistics from the Dubai Traffic Authority indicate that 97 per cent of accidents in the emirate were caused by male drivers.

With the winter rain comes even more chaos than usual. One wet February morning saw 500 accidents of varying seriousness reported before 9.00am, the result of motorists failing to adapt to the wet road conditions, speeding and not leaving enough distance from the vehicle in front. By the end of two days of rain, figures showed there had been an accident every two minutes during that period.

The police cite the main causes of death on the roads as reckless driving, speeding, colliding with stationary vehicles, ramming into the right side of vehicles, head-on collisions and jumping red lights. According to the Ministry of Planning, UAE nationals accounted for the majority of accident victims in 2002 (32.5 per cent), an alarming fact considering they make up only 20 per cent of the entire population.

With accident statistics increasing each year and no viable solution in sight, it’s an unfortunate probability that you too will be involved in an accident to some degree or other.

Be aware though that procedures for minor accidents change regularly: one month you have to wait at the scene and leave your vehicle where it is or get fined; the next, you’ll be fined if you don’t move your vehicle out of the way, and the next month, motorists involved in a non-injury accident must go to the nearest police station to report it.

If you drive, you’ll be liable to pay ‘blood money’ (Diya) if, as a result of an accident, someone dies and you’re to blame. Diya can range from between Dhs200,000–500,000 and is something your insurance company may not pay.

If this happens and you can’t pay, you’ll end up in jail until you can. This happened to one man convicted of drink driving and the manslaughter of a Dubai resident. Although the driver was handed down a lenient four-month jail sentence, he will stay in jail until he can pay the Dhs200,000 Diya, which could be some years off. 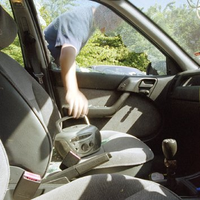 Unfortunately, car crime is on the rise, as so many motorists park their cars and leave the engines running, especially during summer months when they want to keep the car’s air-conditioning on. However, numbers are relatively low; only 161 cars were stolen while the engine was running between 2004 and May 2006.

Motorists caught using their mobile phones while driving could face jail in a new initiative launched by the police. Currently, a police officer’s power is limited to dispensing advice.

In another initiative, the police have launched a new SMS alert service, with motorists alerted on their mobile phones when they commit an offence.