Where do you need to pay a toll?

Although Germany began charging an autobahn toll for trucks in 2005, passenger car drivers can still drive the Autobahn without any extra charges (so far). But neighboring Austria and Switzerland (and other European countries) charge a Maut, or toll, for using their high-speed, limited access highways.

Rather than a kilometer-based turnpike toll, such as that exacted on France's autoroutes or Italy’s autostradas, Switzerland was the first to charge motorists an annual flat fee for the use of its autobahn network. Austria later copied the idea, but also offered toll stickers for shorter periods of time, a nice benefit for the many tourists who visit Austria for only a few days, a week, or a month. 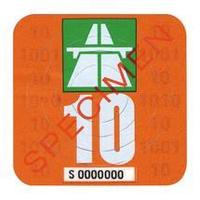 An Austrian or Swiss “Vignette” must be displayed on a car’s windshield. (Motorcycles are also subject to the autobahn sticker requirement. Trucks pay a kilometer-based toll.) Motorists entering Austria or Switzerland without a vignette must purchase one or be subject to heavy fines (see below). You’re okay if you stay off the autobahn or Schnellstraßen (limited-access roads), but that’s not easy to do. If you’re lucky, your rental car may already have one. If not, you will have to contribute 40 Swiss francs (US$35) to the Swiss treasury upon entering that country.

Unlike Switzerland, Austria permits drivers to purchase an Autobahnvignette for various periods of time, from ten days to a full year. The so-called Mautvignette (toll sticker) must be affixed to the inside of the front windshield. The stickers come in varying colors in different years, making it easier for the police to spot an invalid Autobahnpickerl, Austrian slang for “autobahn sticker.” To prevent misuse, the stickers are also designed to tear apart if removed from the window glass.

Prices for an Austrian passenger-car vignette range from 7.60 euros ($10) for a 10-day sticker to 72.60 euros ($93) for a year (14 months). You can buy an Austrian or Swiss vignette at gas stations, at border crossings, or at post offices. It is also possible to purchase a Swiss autobahn sticker in advance, online from the German postal service (Deutsche Post), from automobile clubs, and the Swiss Tourism office in London. Tip: Sometimes people sell extra vignettes at eBay or other online auction sites.

Generally there are special rules on the Autobahn  - specially in Germany where in some places there are no speed limits.

In addition to the normal autobahn sticker, there are tolls for several stretches on the Austrian highway network. Examples include the Brenner Pass autobahn (€8.00), the Tauern autobahn (€10.00), and the Arlberg tunnel (€8.50). Driving through the Felbertauern tunnel costs €10.00, while the scenic Großglockner Alpine road will set you back €26.00.

NOTE: The fine in Austria for driving on the autobahn without a valid sticker: 400-4000 euros (ca. $520-$5200). That does not include the toll surcharge penalty (€120/$156) that must be paid at the same time. That means the minimum fine could cost you more than six times as much as the cost of an annual Austrian autobahn sticker!

In Switzerland, drivers caught driving on the autobahn without a sticker have to pay a fine of 100 Swiss francs plus 40 francs for the vignette.

This article in an extract from " When in Germany  " by Hyde Flippo, a practical guide to German life, language, and culture. Click here  to get a copy of the book.