Some useful tips on rail travel in Germany and Austria

Traveling by train in Europe can be a lot more pleasant if you know a few tricks of the trade—particularly in Austria, Germany, and Switzerland.

European trains, including German Rail, are among the best in the world. Europe's fastest trains, the French TGV and Germany's ICE (InterCity Express), are technologically ahead of anything running on U.S. rails. The popular InterRegio express trains zoom across country borders, connecting major European cities. The normal, everyday InterCity (IC) and EuroCity (EC) trains crisscross Europe, offering convenient connections to cities inside and outside Germany. 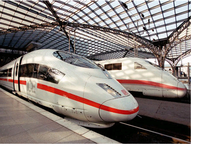 For shorter journeys there are numerous trains ranging from local commuter runs to fairly fast D-Züge (through-trains) that are sometimes just as speedy as InterCity trains. The recently discontinued Eilzug will not be missed. Although eilen means "to hurry," an Eilzug wasn't really that fast. The regional trains are now designated: RB (RegionalBahn, stops everywhere), RE (RegionalExpress, faster, does not stop everywhere) and SE StadtExpress (semi-fast connections connecting cities to their outskirts), not available in all parts of Germany. Learning to read the train codes (RE, EC, IC, ICE, etc.) on German schedules can help you find the fastest train to your destination.

Since all big or medium-sized cities, as well as many smaller communities in German-speaking Europe have a train station (or two or three), train travel is convenient and efficient. The main train station ( Hauptbahnhof) is usually located in the center of town, from which commuter trains, taxis, streetcars, and buses can take the traveler straight to a final destination. The weakest link in this otherwise efficient chain is often the station ticket office, where it seems there are always too few ticket agents for too many passengers. Long lines and long waits are all too common.

Although the "new" Deutsche Bahn AG has finally entered the 20th century by accepting credit cards, bearers of Visa, MasterCard, or American Express cards must be wary. Look for logos and/or a sign (sometimes handwritten) that mentions " Kreditkarten" or "credit cards." You can't just walk up to any ticket window and expect to use your card, even though that is common practice in most of the world. (The Austrian and Swiss railroads are a little better in this regard.) Recently, even in Frankfurt's busy main station, only a limited few ticket windows offered credit card acceptance. And don't assume you will be able to use a credit card to purchase train tickets at every one of the over 5,000 rail stations in Germany, although it has become more common. You should even ask in advance at a German travel agency to be sure they accept credit card payment for rail tickets.

All European trains are divided into first and second class. Look for a large "1" or "2" painted on the car near the door. Some special trains (EC, IC, ICE, etc.) also have a surcharge or Zuschlag of six marks added to the price of the ticket, whether it is first or second class. If you have not paid the surcharge, the conductor will require payment (in cash) when checking your ticket. The surcharge for ICE trains varies, depending on the connection.

One big advantage of having a Eurailpass, Flexipass, Europass, or German Rail Pass, besides any cost savings, is you can avoid any ticket-buying hassles. You'll only have to confront a DB ticket window to make reservations if you want them. (This is advisable during peak travel periods in the summer or on popular trains.) But remember that these special tickets have to be bought in advance and may have restrictions. A Eurailpass, for example, may only be purchased in North America. Austria and Switzerland have their own rail pass offers. (See a travel agent for details on rail passes.)

Another good idea, if you will be using the train regularly over a period of time in Germany, is the BahnCard. It won't spare you the task of buying train tickets, but the BahnCard will give you a 50 percent reduction in the cost of any tickets you buy during a one-year period. (See the Deutsche Bahn Website  for current pricing.) There are special lower cost versions of the BahnCard for students, teens, married couples, young children and families. The card is not valid for special reduced-priced tickets, and any supplementary charges have to be paid in full. But the BahnCard is valid on every day of the year, including holidays. The card is issued to you in your name, and is also a Visa credit or debit card.

When you are looking for a seat without having a reservation, notice the orange-colored reservation ( Reserviert) cards slipped into holders on the luggage racks above the seats. If you have a reservation, you're looking for your own card above your designated seat(s). If you don't have a reservation, you are looking for the cards so you can avoid sitting in a reserved seat. The card will tell you which segment of the train's route has been reserved for that seat. If you are getting off before or after the reserved segment, then you can sit there without worry. If you happen to be sitting in a reserved seat, the person entitled to that seat will ask you to relinquish it. When the conductor comes by to check tickets, he will verify the seat reservation if there is one.

Some rail enthusiasts have come to appreciate couchette travel, while others use it only as a last resort or never. Offered by almost all European railways, a couchette car ( Liegewagen) has compartments that have regular seats by day and sleeping bunks by night. Intended for longer journeys such as Paris to Frankfurt, Hamburg to Munich, etc., the couchette seats on each side of the compartment magically transform into four or six bunks. The porter drops off a blanket, a pillow, and a pocket-like sheet for each person. After some clever unfolding and the snapping of a few latches, the bunks are ready. There is no real privacy, and you probably won't know most of the people in the compartment. Your traveling companions may be male or female, young or old, and from any part of the world. Couchette travel is not for timid souls. It can be a fascinating adventure, a sleepless night, or both. You must make reservations for a Liegewagen, and there is an extra couchette charge (which is usually much less than staying in a hotel).

This article in an extract from " When in Germany  " by Hyde Flippo, a practical guide to German life, language, and culture. Click here  to get a copy of the book.