The top 5 must see islands

Greece may be known for its variety of food, and ancient history, but also for its many beautiful islands. Although it was hard to choose, here is the Just Landed top 5:

Once home to Zeus, father of the Gods, Naxos is unique thanks to its blend of different lifestyles. On one hand it has the well known beach culture, with the entire west coastline being a paradise for watersports enthusiasts.

On the other hand, there is culture. A huge marble arch from an uncompleted temple overlooks the port from a nearby hill. Called the Portara, it is also the symbol of the island.

Last but not least, Naxos is also known for its traditional villages, which all have their own reputation. Kinidaros is famous for its bakery and musicians; Chalki has excellent jam shops, and locals come to Apeiranthos to eat the crepes. Maybe the best thing about these villages is that they are not touristy, and present you with the real Greece.

Probably the best city in Crete is Chania, which can be found on the north coast. Chania is an old harbour town with its own airport, making it easy to reach. Whilst there, make sure to go to the White Mountains (approximately 30 kilometers away), as it is the perfect spot to relax or go walking.

Besides Chania, the capital of Crete, Heraklion, is definitely worth a visit. Its harbour is as beautiful at night as it is during the day and is worth visiting at least once! Just like Chania, Heraklion has its own airport.

Crete is known to be the Wild West of Greece. Many people are fiercely independent and there are even stories that some citizens have a fondness of guns. Don’t let this prevent you from going to Crete, as it offers many mouthwatering dishes due to its variety of microclimates. 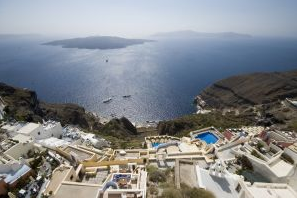 Santorini is one of the most breathtaking islands that you will ever find. Known for its traditional whitewashed villages at the top of steep volcanic cliffs, you could call Santorini the diamond of the Greek Islands. There are astonishing views as the cliffs fall sharply into the Aegean Sea.

When choosing the best village, Oia is perhaps the most charming, and has outstanding sunsets. Unfortunately, there are a lot of tourists, especially during the high season, so be prepared to wrestle through the crowds. Nonetheless, it is worth the hassle once you see the sun sink slowly into the Aegean Sea.

The scenery is just as unbelievable at sea level. Red Beach has a rust-colored backdrop, and gives visitors a perspective of the size of the volcano,  as it is the only part of the island that has a view towards the caldera., which is a large crater formed by a volcanic explosion or by the collapse of a volcanic cone.

Rhodes has a fascinating history. A visit to its medieval Old Town is an appropriate place to start, specifically the Avenue of the Knights which still has a noble aura to this day.

A trip to Lindos is definitely worth the effort. It has an ancient acropolis that overlooks the village from a nearby hill. One of the bonuses of Lindos is that there are no hotels in the village itself, making it less filled with tourists.

If you have time left, go to Symi via ferry. The moment the ferry switches off its engine and glides into the long, narrow harbour shows you a beautiful scenery that can’t be missed.

Tourism is not as heavily promoted for the island of Aegina as other islands, and this is no wonder. Aegina is a completely different world compared to the crowded streets of Athens, even though it is only 40 minutes away.  Here, you will find horse-drawn carriages and amazing neo-classical buildings. Travelers should definitely visit the historic temple of a local goddess, who has since been identified as Athena.

These islands will offer you much to see outside of Athens and Just landed wishes you a pleasant stay in Greece!