The British influence in Hong Kong

As Hong Kong was under British rule for 156 years between 1842 and 1997, it is hardly surprising that British influences continue to feature heavily in its culture.

The island was ceded to Britain after the first Opium War ended in August 1842; with the signing of the treaty of Nanking by both Queen Victoria and the Daoguang Emperor. Throughout the 156 years of British rule, cultural ideas about fashion, architecture and customs were shared by Britain and Hong Kong, and many of these remain to this day. Although Hong Kong returned to Chinese rule when Britain’s 99 year lease expired in 1997, the island itself has retained cultural characteristics that reflect the legacy of its British past.

Examples of British colonial architecture can be still be found around Hong Kong, most of which were built during the Victorian period. St John’s Cathedral, which was completed in 1849, is the oldest Christian church in the area and was designed in the style of early English Gothic architecture. It is reminiscent of traditional Victorian values and has been open to the public since 1997. Murray House is another example of traditional Victorian influence in Hong Kong’s culture. Built in 1844 in the present-day business district, it was moved to the south of Hong Kong Island in 2001. Originally built as the officer’s quarters of the Murray Barracks, it has since been used as a command centre by the Japanese military police, as an execution venue and as a museum. 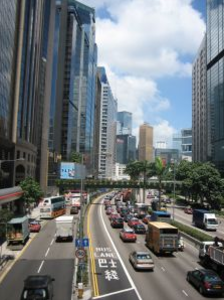 Hong Kong has strong links with international fashion designers, including luxury British brands such as Alfred Dunhill, Paul Smith and Harvey Nichols. Alfred Dunhill’s specialist Landmark Prince’s location brings a taste of British tailoring to Hong Kong that reflects its love for international style. Hong Kongers are known for their broad range of fashion tastes and have been described as being fashion crazy, due to their tendency to quickly take up trends originating in other cultures. Tailoring has been consistently popular in Hong Kong, showing influence from both British fashions and Shanghainese tailors.

English Common Law still governs Hong Kong, meaning that its legislative process is similar to that of Britain. Political structures also have visible British influence and the Hong Kong education system is based on the English education system. Although all of these structures  have developed since 1997 and consequently differ from Britain’s political systems, there is still a clear colonial influence that is apparent at a societal level.

Since China resumed governance of Hong Kong in 1997, the government has adopted the bi-literate and tri-lingual policy. This means that the two official languages  of Hong Kong are Chinese and English. Cantonese is accepted as the default Chinese language, whilst Mandarin and Putonghua are also used. The designation of English as an official language demonstrates the continuation of British influences on both Hong Kong’s culture and the lives of its people.

This article was submitted on behalf of Dunhill, Hong Kong