Ireland is for Lovers

Ireland holds history, passion, love, literature and nature true to the heart. When coming here, it's only understood how special the Irish are: a passion and kind people. So special that will make the traveler want to stay!

A long time ago one had to be crazy not to appreciate this beautiful-lush-green-Island: located west of England, North Atlantic and the western most portion of Europe. Based on Celtic traditions that bonded this culture with mother-nature and explorers went from Ireland, expanding their tribe to Scotland, later south to northern Spain, southern France and reaching as far as Switzerland. Later in the 4th Century a Scotsman that escaped from childhood-slavery entered with Christianity into Ireland and became the famous Island's, Saint Patrick.

The history of Ireland began with turmoil since the IX Century, with invaders called Vikings, after this, nothing would be the same. Two centuries later the Anglo-Saxons entered Ireland and life changed through the Medieval-period. From a society lead by druid women, to a conquered, colonized society that lasted until the beginning of the 20th Century.

Ireland gained independence with its 20 counties to the south. The north has remained part of England until present-day. But Ireland has stayed intact and quite unique: through its nature, history, food, architecture and spoken manner. The Ireland known is one of kindness, poetry, love and passion. Passion for what is important… It's history

Those that are remembered still influence Ireland, although they are long gone! Men like Oscar Wilde, W.B. Yeats and Michael Collins. Those made Irish history for the world and they certainly made it great! Ireland has influenced the world and the Americans through literature, poetry and in that special way and other than that, the most important need to fight for every lost cause! 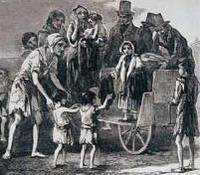 That is how the Irish are known, the kind-people for those to love! Like an injection, the same vibrancy was transmitted when the Irish had to immigrate across the world. Those that survived the 1840s and 1850s Potato Famine, which made five million take ships across the sea and landed in places like the United Kingdom, United States and Australia. The tragedy of the Famine caused by the English themselves cost the lives of one million people. The Irish were a tired and abused people; however, through inspiration, always fought their way back! Which has made these peoples so special; they are 'bloody' resilient!

Dublin was always the capital for political-action, but it was Galway on the west where the fight began against the English and across the Island's country-sides. Newgrange and Burren are the ancient capitals and burial sites for the Kings, Queens and Nobles of Ireland before 3,500 B.C.E. And for Belfast, a place covered in bloodshed after the 1968 Revolution and this City was nearly destroyed until the 1998 Ceasefire.

Today Belfast is beautiful, vibrant: with shops, fashion and lovely-women that look like models. Something just full of life that makes this place even more attractive, and it's not only Belfast, it extends to Sligo and while driving into Connemara and it never ends until reaching across by car, train or bus and landing on Watersford. What are always green, rainy, forested portions, plenty of castles, B&B (Bed & Breakfast) and furthermore, full of modernization is an Island to focus on what is extraordinary, quality of life.

What can make this Island all around incredible are the nature is its Rings, like those in Kerry and furthering south is a Peninsula like Beara. With always a strong-English language spoken by the Irish and in an ancient-Gaelic language, everything comes alive after 5 p.m. at the local pub. There is good form of black-malted beer called Guinness and it goes down even better with a Shepard's Pie. For breakfast there are blood-puddings, fried tomatoes, bacon and eggs. Nothing beats a great breakfast with the traditional-tea with milk.

The other way round

Driving in Ireland is the other adventure. All gears are on the right; therefore driving is on the left! Don't worry, it's not that bad, all that visit soon get use to it! Especially those whom are 'lefties' adapt quite fast and easily.

Where to land? Commonly, it was better to land in Shannon; however, after 2005, the routes from America changed. Most of the flights land in Dublin and the City is quite cosmopolitan.

The only mess is getting out when driving out for the first time. Everything thing seems to go in a circle, always, if with companion, hold a camera and take pictures, this Town is quite panoramic. While driving, intend to spot the M-1 or M-4, in less than 30 to 45 minutes one will leave the City from the Center.

So for romance, the passions of history, poetry, nature or travel, there is always the best, Ireland. Not for one visit, but for many. Cied Mille a Failte!/A Thousand Welcomes!