The tiny island with an enormous heritage

A journey into Malta's cultural past

Located at the heart of the Mediterranean Sea, the island of Malta is a small republic that has held great economic, strategic and cultural significance for nearly 7,000 years. With a fascinating history and a stunningly diverse array of architecture, Malta is a culture vulture's dream destination.

Found just 50 miles south of Sicily, 176 miles east of Tunisia and 207 miles north of Libya, Malta’s position has seen it colonised by many important rulers throughout history; from the Romans to the Knights of St John, to the French and in most recent times, the British.

Each ruling nation has left their marks on this tiny country, and since it joined the European Union in 2004, more and more people have flocked to the island every year to take advantage of the year-round sun and temperate seas, as well as exploring the island’s unique and varied cultural heritage.

An archipelago steeped in history

Malta’s history has been of great significance, and the island is home to three UNESCO World Heritage Sites, of which the Ggantija Temple complex on Gozo is the oldest,dating from around 3600 – 3200 BC, and considered one of the most important archaeological sites on the planet.The sheer size of these megalithic stones and those at sites like Mnajdra on the Maltese mainland, should be enough to convince any visitor of Malta’s place in prehistoric studies.

Elsewhere, the fortress city of Valletta, Malta’s capital city, which was named for and built by the Knights of St John, with work starting on the city in 1566. Today, the island’s tourist industry owes a lot to the Knights, with thousands of visitors dazzled by the gleaming Baroque spires of St. John’s Cathedral and beautiful waterfront vistas of the Grand Harbour every year.

Lastly, there is the mysterious Hypogeum, or underground cavity, a series of halls, chambers and passages that were carved out of living rock between 2500 – 3300 BC. Boasting a wealth of archaeological discoveries, this site is strictly regulated, and only a set amount of visitors can enter each day, so it’s best to book ahead to avoid disappointment. 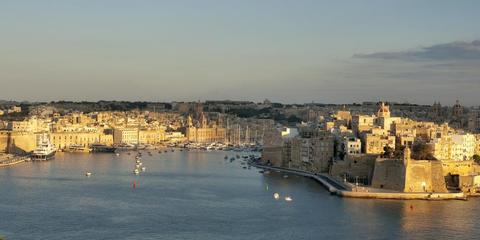 With an extremely varied history, Malta’s culture is as unique and colourful as you might imagine. While some influences haven’t quite survived the ravages of time intact, such as the evidence of Roman rule, others, such as the impact of immigrating Sicilians, can still be seen today. The Italian influence can be found in local cuisine, which places a very important emphasis on fresh vegetables, olive oil, pasta and seafood, while early Spanish settlement in the 16th century still echoes today in the guitar-based folk music and summer street fiestas.

However, due to the most recent influence of the British, and the impact of WWII, some traditions in Malta have a distinctly British flavour, such as a parliamentary style that is very similar to that of Westminster, an annual Christmas pantomime, which is performed at the Manoel Theatre in Valletta and the adoption of roast turkey and plum pudding over the traditional Maltese rooster and cassata dishes at Christmas dinner. And just like in the UK, Maltese drivers drive on the left hand side of the road.

While Maltese is the official language of the republic, English is also widely spoken, and other languages, such as Italian, French and German are also spoken and taught in schools across Malta. The term ‘melting pot’ could truly have been invented for this modest-sized Mediterranean isle and whether you’re just passing through or planning to stay, the huge heritage of Malta will be evident wherever you look.

This post has been submitted by Krysten James in collaboration with Thomson, the UK-based travel operator with online comparison for flights, cruises and cheap holidays, combining her knowledge about Malta's undiscovered marvels and Thomson's holiday experience . Krysten writes on travel and budgeting advice for various blogs and is currently island-hopping in the Mediterranean as part of her research.