A country on a plate

Much like the culture of Romania in general, the country’s cuisine reflects its wide and varied history. Romanian food is hearty and honest, with traditional cooking methods largely continued to this day.

Meatballs from Turkey, borscht from Poland, moussaka from Greece and schnitzel from Austria all make an appearance on the Romanian dinner table, reflecting the influence of the many countries around it.

Like much of Eastern Europe, Romania is known for its sour soups. Borș, or fermented wheat bran, is added to give them their unique sour taste. The region also has a reputation for putting tripe in soup, ciorbă de burtă is the Romanian take on this; definitely not one for the faint-hearted. 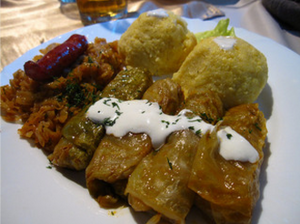 Mămăligă, or polenta, has long been a staple of the Romanian diet. Once the food of peasants, this maize-porridge, can now be found on the menu of some of the country’s trendiest restaurants. Unlike Italian polenta, mămăligă, is often made so thick that it can be set and sliced, thus used a substitute for traditional bread.

According to the Romanians ‘real cheese’ is only ever made from sheep’s milk. Bulz ciobanesc is a dish associated with Romanian shepherds. During the annual migration to the mountains with their flock, they do not have their wives to cook for them and instead prepare this dish for themselves. Boiled maize flour is used to make a dough which is then filled with butter, ham and, of course, sheep cheese.

Sarmale is as traditional as food in Romania comes, the dish’s origins are however Turkish. Rice, minced pork and vegetables are all stuffed into cabbage or wine leaves and baked in a clay pot. It is a recipe that is passed down through generations from mother to daughter; being able to make your husband sarmale is considered a desirable quality in a wife.

No celebration in Romania would be complete without cozonaci, a sweet bread with raisins, cocoa or nuts. It is traditional in rural parts of the country for women to gather together at one of their houses and prepare the cozonaci together, each then taking some back to their families at home. 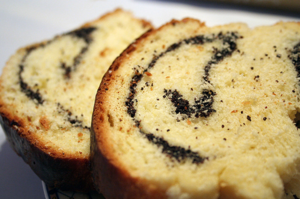 Alcohol is somewhat synonymous with Eastern Europe, and in Romania it is no different. However, the stereotype of heavy spirit drinkers is a little off the mark in Romania.

The country has a long and successful history of wine production. During communist control the industry struggled due to under investment and over production, however, is it now back to full strength.

As well as the usual grapes; merlot, chardonnay etc, Romania boasts some native varieties of its own. Tamaioasa Romaneasca produces an aromatic white wine with a hint of honey, and the Feteasca Neagra from Transylvania is a rich, fruity red.

Romania’s best known red wines originate from Dobrogea and Murfatlar in the southeast, with arguably the best coming from Dealul Mare in the south. Another of the well known wine regions in Romania is Tarnava in central Transylvania, known for its white wines.

The Romanians have been responsible for giving the world many things, but we have them to thank for what is now an American deli favourite. ‘Goose-pastramă’ was the starting point for the pastrami that we now all know and love.

As the name suggests it was originally made from goose. The recipe was brought to America by the Romanian Jews that settled in New York’s ‘Little Romania’ neighbourhood. The goose was salted, seasoned and smoked, however, it was soon replaced by beef which was cheaper and more widely available in the US.

Nothing in Romania escapes being the subject superstition and there are many beliefs associated with food and eating.

You should be careful when choosing your seat at the dining table, even where you sit can be dangerous in Romania. If you’re unmarried, you shouldn’t eat at the corner of the table or you risk never marrying.

Leaving food on your plate is also risky behaviour, folklore has it that leaving leftovers will result in you marrying an ugly husband or wife. Whereas biting your tongue whilst eating tells everyone else at the table that you have recently told a lie.