One of the best spots in Geneva

Where do you find an 80-year-old couple sharing their afternoon café, a corporate businessman connected to the internet via Wi-Fi, a mother taking her daughter for an afternoon stroll, and a group gathering to study for class? The Place du Bourg-de-Four, the oldest square in Old Town Geneva.

One thing has not changed a bit in the Place du Bourg-de-Four since Roman times. It is still a center for commerce and a meeting place for the Genevois. Remnants of the ancient roads that led south to Annecy and Lyon and east to Italy and the Chablais are found buried in this deep within the square. At one time the Place served as a Roman forum and cattle market, then later a medieval town square. It also served as a safe haven for masses of Protestant refugees fleeing persecution in the 16th century. 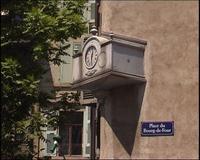 The building of the Palais de Justice on the Place was constructed in 1707. It later sheltered the convent of the Order of St. Clare and also a hospital until 1857. In 1860, it began housing the courts of law behind its 18th century restructured frontage. This explains there are many intricate varieties of architectural styles on the Place, all blended in their display and ranging from medieval modern in their charm.

This crossroad in the heart of the Old Town is a treasure of magnificent collections of 16th century architecture, as well as handsome constructions of the 17th and 18th centuries. It is an established place of history, but with its heart beating and intent on the future. Still today, hosts of Genevois gather around the18th century flowered fountain of the Place du Bourg-de-Four. Locals gather to sit and sip cafés, take a leisurely walk, or soak up the ambiance in the busy bistrot terraces around the square.

Nightlife in the Place du Bourg-de-Four is just another example of the quintessential Genevois crossroad. Among the antiquaries' shops, art galleries, book and tourist shops, people of all ages and backgrounds gather to meet for drinks and begin their evening in one of the many friendly cafés, bistrots, or bars. One of the best-known starting points is La Clémence with its large terrace accommodating bohemians, bourgeoisie, and the cultured elite alike. Everyone is welcome and finds their place in the Place du Bourg-de-Four.

Where to find Place du Bourg-de-Four?


Soupçon
8 place du Bourg-de-Four
Tel : 00 41 22 318 37 37
A trendy bar and restaurant with lunch and dinner menus offering a wide choice of meat, fish and vegetarian dishes. For Sunday brunch, the buffet is irresistible.

By Kari Masson, a freelance writer for travel, cross-cultural, and expatriate-focused publications. More than 50 of her articles have appeared in North America, Europe, and Africa. If you are looking to add dynamic creativity to your publication, contact Kari at