Vietnam has one of the longest human histories on the planet, with archaeological findings dating back at least half a million years. The century or so of French rule seems minor in comparison, however their influence can still be seen throughout much of the country.

The first French Catholic missionaries began to arrive in Vietnam in the 17th century. Of these, one of the most important was Alexandre de Rhodes, who managed to convert around 6,000 people between 1627 an 1630. Although he was later expelled, as many missionaries were, the lasting impact of Christianity is shown by the 6% of the Vietnamese population who remain Roman Catholic to this day.

Arguably more importantly, Alexandre de Rhodes also played an important role in sculpting Vietnamese language into what it is today. Prior to his arrival, Chinese characters formed the base for written Vietnamese. However, he introduced the adapted Latin script which remains dominant in the country even now. These letters are much the same as the English alphabet, except with extra marks and accents to portray the significance of tones within the language. This means it is much easier for westerners to learn than most other Asian dialects. It can also be helpful in getting a rough idea of what particular signs or notices in the country are saying.

Although trade, education and the government were in French during the occupation, there is relatively little proof of this in modern day to day life. Only a select few people from older generations still speak French, as most of the younger generations choose to learn English. This is thanks to the growing capitalism and popular youth culture that has taken root in the country over recent years.

Certain words in the Vietnamese vocabulary show a French influence. Examples of this include ga for train station (coming from the French gare), and ma đam for Mrs.

With the French being world famous for their food and drink, it would be surprising if the Vietnamese people hadn’t grown to love at least some of it. However, rather than copying French cuisine, the people of Vietnam have very much adapted it to make it their own.

It may be slightly strange to see fresh baguettes (Banh mi) being sold on the streets, but they have a distinctly local twist. Instead of salami and cheese, they’re filled with grilled meat (generally pork) and herbs. There are also a range of sweet French delicacies widely available, such as croissants, flan and custard tarts.

Coffee, introduced by the French has now become an integral part of Vietnamese culture. The variety here is very strong, and tends to be drunk with very sweet condensed milk. It is also enjoyed cold, known as ‘cafe da’ and served with ice.

In 2012, Vietnam surpassed Brazil to become the largest coffee producer in the world. It sold 800,000 kilograms in the first half of the year, showing coffee is not only a widely enjoyed drink but also a vital part of the economy. 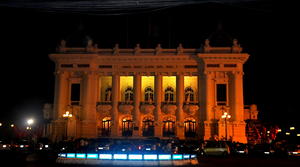 Whilst walking around Vietnam, you may have to do a double take when suddenly being confronted with a typically French building. However, most prevalently in Hanoi, enclaves of colonial architecture are still very visible. The French settlers wanted to turn this city into the capital of their Asian empire, and made many grand constructions in pursuit of this.

The mastermind behind this architecture was Auguste Henri Vildieu, who was given the role of being the leading architect of colonial Vietnam. He was responsible for buildings such as the Presidential Palace, in which you could forget you’re in Vietnam whilst walking around the grounds. In fact, as it was such a strong reminder of the country’s occupied past, Ho Chi Minh refused to live in the palace when he came to power. Instead, he had a more typically Vietnamese stilt hut constructed nearby, in which he could live and conduct his governing of the country.

Another fascinating example of architecture from the French is the Hanoi Opera house. Built in 1911, this is undoubtedly one of the jewels of the city and is characterised by it’s typically European balconies and pillars. It’s also not uncommon to see French style cafes and cinemas while wandering cities of Vietnam.

Not even the highlands of Vietnam escaped the colonialists, as they chose to use this area as a retreat from the heat in the lower parts of the country. Here they constructed French style villas, especially around Dalat. Many of these now serve as guest houses for tourists.