Vietnam is a long, thin country that snakes along the South China Sea. Its geography means you’re never too far from the coast, a fact which very much manifests itself in Vietnamese cuisine. 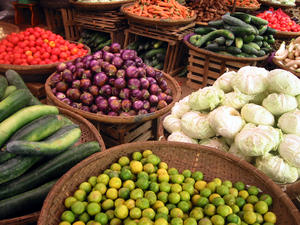 Fish sauce (nuoc mam) forms the base for many meals throughout all of the country. An often overwhelming array of options are available, however in general, it tends to have a sweet and salty flavour. Whilst inevitably used in cooking, it can also be put on the table as a standalone condiment to complement meals. In this case, it can be combined with lime and chillies to give it a sour and spicy flavour.

Being a vegetarian isn’t too taxing in Vietnam. Vietnamese people have a wide understanding of the concept thanks to the presence of Buddhism, and a general interest in healthy living. Despite this, it can be hard to convince them that fish isn’t acceptable for all vegetarians!

There are some regional differences in Vietnamese food, mainly due to the varying climates in different parts of the country. Fruits and vegetables thrive in the fertile soil and tropical weather of the South. This leads to very colourful and spice heavy dishes.

In comparison, in the North, the colder climate means spices are not present in such abundance. As a result, it’s more common to flavour food with black pepper.

Much of the population of Vietnam enjoy noodle soup (pho) on a daily basis. It’s most commonly eaten for breakfast, from any of the huge amount of roadside stalls that prepare it fresh each day. The soup is made up of rice noodles with beef or chicken in a clear broth, flavoured with spices, and topped with fresh herbs. Most locals have a loyalty to a particular stall, however it can be hard for visitors to know which ones to go for. A good tactic is to pick one that is busy with local customers. If it’s good enough for them, you should hopefully be on to a winner!

Banh Xeo are popular rice flour pancakes, generally stuffed with chicken or pork and plenty of vegetables such as onions and bean sprouts. The name translates as ‘sizzling cake’, referring to the sound the rice batter makes as it cooks. The pancake tends to have a yellow colour, as it’s flavoured with turmeric. It’s common in the South to add coconut milk to make the batter sweeter. 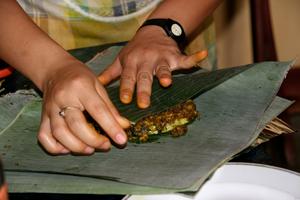 Banh Chung are a real delicacy, and form an important part of Tet celebrations, although they’re not exclusive to this period. The dish consists of rice, meat (generally pork) and mung beans, wrapped in bamboo leaves to make a pretty green package. Once tied together with bamboo strings, it is boiled for up to 14 hours. Although they taste great, it’s the story behind this food that makes it really interesting.

Legend has it that an ancient King chose to retire after defeating the Shang Dynasty, and was faced with the task of choosing a successor from his numerous sons. As a challenge, he sent them out to scour the land and find the most worthy food to offer to deceased ancestors, but that would also please his own tastebuds.

Whilst most of them searched far and wide for the most exotic and rare thing they could find, one son looked a lot closer to home. The youngest son came up with the concept of Banh Chung thanks to an apparition he saw in a dream. It told him to make his dish with simple and widely available ingredients, as it would be representative of a love of the people of Vietnam. These little parcels impressed the King so much that the youngest of the sons won the throne. They are still eaten at every Tet celebration as one of the necessary offerings to ancestors, and also taste truly delicious!

Tea is a very popular and common drink throughout Vietnam. It comes in both an iced version (tra da) and a hot version (tra nam). It can be different from what we’re used to in the West, as loose leaves will often be left floating around in the pot or cup. Once you buy a cup, a lot of places will keep on filling it up for free. Beware that certain restaurants will charge you per cup, so it’s best to check so you’re not in for a nasty surprise when the bill comes!

Ruou is a Vietnamese whisky like liquor made from rice. The brewing process greatly varies, however it’s not uncommon for it to be mind-bogglingly strong. This means it’s best to take care when drinking it! A common tradition is called ruou can, in which a big pot sits in the middle of the table, and everyone sits around it, drinking through long straws.

A common delicacy, widely available from street vendors is called Balut. This is a boiled duck egg, with a semi developed duckling inside. This may seem like an odd concept as the eggs in the West come from sterile animals, and as such are never fertilised. The bones of the fetus are not yet fully developed so can be chewed easily, and the animal gives the egg a slightly meaty taste.

Another quirky, yet morally dubious delicacy is snake wine. This is a bottle of rice wine, with a whole and normally venomous snake inside. The alcohol denatures the venom so it is harmless, however the drink does tend to be very strong. Locals claim it to be an aphrodisiac as well as a cure for back pain.