What are the biggest problems for expatriates?

Expatriates moving countries are faced with a wide range of challenges, including the move itself, the search for accommodation and the integration into a new society.

Though the move to a new country might seem a great experience at first, many expatriates have a hard time getting things done in the beginning adapting to their new life abroad.

The most common problems faced by expatriates include (HSBC Expat Explorer Survey, 2008):

Younger expatriates have fewer problems with learning the local language, but have a harder time making friends and settling the practical issues of their move.

On the other hand, older expatriates often move abroad with significant expatriate benefits that solve most of the practical problems like the search for accommodation, but they have a harder time learning the local language. 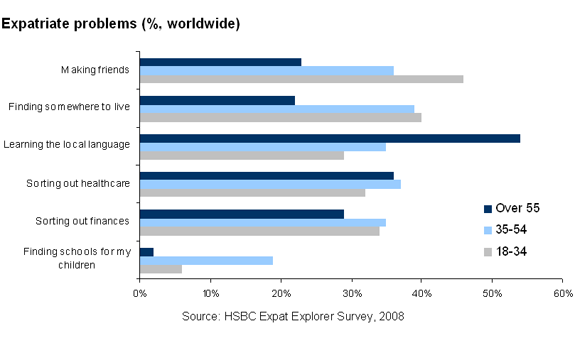 When it comes to making new friends and adapting to the local culture, there is also a big difference between destination countries. According to HSBC Expat Explorer Survey, Canada seems to be the most welcoming countries to expatriates, with almost all (95%) of respondents claiming that they made friends with local people. This was followed by Germany (92%) and Australia (91%). The United Arab Emirates was revealed to be the most difficult country to make friends with local, with only half (54%) of expatriates saying they made any local friends at all. This "ease of integration" also seems to be a decisive factor when it comes to the most popular expatriate destinations.

Although socialising with other expats partially compensates the lack of local friendships, it certainly doesn’t ease integration in the local society and often gives the impression that expatriates are ‘not interested in integrating’ or ‘prefer their own social circles’. That said, many expatriates tend to make friends with other expatriates in the country they live in.