The Hague’s Grote of Sint-Jacobskerk

a landmark for centuries

The Hague is a unique city; it is home to the Dutch government and it is the only sizeable Western European city by the sea. During the Middle Ages, The Hague was actually the administrative centre of Europe and even today the city still retains its international character and prestige.

Whether you are planning a city break or you are relocating to this historic city, you must visit Grote of Sint-Jacobskerk (St Jacob’s church or simply the Great Church) which is impossible to miss as it stands in the heart of the city. For centuries, The Great Church and its tower have been a landmark for travellers to The Hague.

A peek back in time

The original function of the tower was to be used as a lookout, so the Dutch could identify any potential danger from the top. Since the city had no wall for protection, this viewpoint was incredibly important for keeping this city safe. The Tower Guards who were responsible for spotting danger or fires were required to blow a trumpet from the top of the tower every half an hour to indicate that they were still on duty and not asleep.

The church has stood in this location since as early as the thirteenth century, but it was originally built as a wooden chapel dedicated to St. Jacob the Great. The wooden chapel was later replaced in the fourteenth century by a stone church as the population of The Hague grew.

After the fire of 1539, the church was heavily damaged, but it was later restored in the same style. This was when a great bell weighing 6000 pounds was installed in the tower. When this epic bell tolled the entire city could be warned of any inherent danger.

The clock tower is elaborately decorated with the image of The Hague coat of arms and a stork. With time, the clock tower developed into a carillon holding 51 bells, 47 of which are easily visible, hanging from the top section of the spire.

During World War II, the Germans demanded that the Dutch government hand over the bells of the Great Church in order to melt them down to aid their war efforts. Instead of refusing to hand over the bells, the Dutch came up with an ingenious plan. The doorway to the tower entrance was made smaller meaning that it was impossible to get the 6000 pound bell through the doorway. This meant that the disgruntled Germans could only take the smaller bells, hardly enough to make much impact to the war effort. Incidentally, these bells were returned completely intact from Germany after the war. 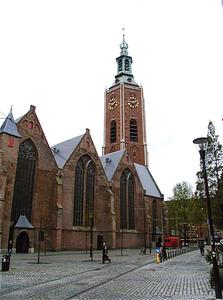 For The Hague the Bell Tolls

The big bell still chimes every hour and the carillon, a special musical instrument plays an automatically programmed melody every day which can be heard across the city. A new melody is written every four months; hundreds of pins are removed and reorganised in different holes in the drum in order to adjust the melody. This can take up to 3 days to complete and ensure it is accurate. The carillon is also played every Monday, Wednesday and Friday between 12:00 and 13:00 by the city bellringer.

Hidden gems inside the church

The Great Church has been restored several times during the 19th and 20th century. During these restorations, a number of special features were added including the coats of arms of the Knights of the Golden Fleece, a striking vaulted nave and a carved wooden pulpit from 1550. The church building is now used for all kinds of activities, such as trade fairs, exhibitions and for festival events.

This article was written by Ineke Mahieu and Ad van Gaalen, authors of the newly published book ‘The Hague Highlights, the 100 must-see places’ which provides the reader with the historical context and location of hundred of the city’s most interesting places. The Great Church features in the book as one of the hidden gems of the city.