How to interact with Poles

When visiting Poland it is important to know some of the ancient Polish ways. It is a country with a lot of history and culture where traditional customs are highly appreciated. These are some of the do’s and don’ts when living in Poland.

As an expat you need to be prepared to be overwhelmed by the exceptional hospitality of the Polish people. Their extended everyday social rituals are old traditions and they are like no other in the world.

Hospitality is a very important aspect of the Polish culture and therefore no costs or effort will be spared. Traditions such as being welcomed with bread and salt prove that Poles are excellent hosts. To be able to properly receive this hospitality there are some rules and etiquette you should know when you want to live in Poland.

Poles are known for being kind-hearted friendly people who have a strong sense of duty towards each other and their family. It is, for example, very important to show special consideration to senior citizens and less-abled people. Especially older Poles still value this old-fashioned courtesy. Giving up your seat to an elderly or pregnant women, gentlemen making way for ladies and saying hello and goodbye to people in an elevator is considered normal.

Although less common now, even a kiss on the hand of a lady as a way of greeting is a Polish custom.

Etiquette in a Polish home

Being on time is very important for Polish people. Arriving late is considered bad manners and poor etiquette.

To address Poles properly you need to use “Pan” for men and “Pani” for women together with their surname. It is not customary to call people by their first name until they are good friends. Greeting can be done by shaking everyone's hand individually while looking at their face and smiling. 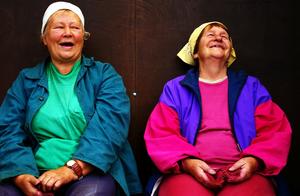 If you enter someone's home it is customary to take off you shoes and be aware that Poles generally don't like it when you ask for a tour around the house.

When having dinner you should be patient and only start eating when the hostess has invited you to. Polish hosts very much appreciate it when you try a little bit of everything.

During dinner Poles usually drink alcoholic drinks but if you want to abstain from alcohol, be prepared to keep on saying no. Toasts are always made with hard liquor such as vodka, and the host should always be the one to make the first toast.

When it comes to business customs, Poland is not that different from other European countries. Make sure to firmly shake hands with everyone separately upon arriving and leaving. While greeting, eye contact is really appreciated.

Poles value respect, honesty and trust when doing business and therefore it is recommendable to build good relationships. At the beginning you should be diplomatic, only when the relationship has been established will Poles become more open.

When visiting a Polish home it is typical to bring a small gift such as flowers, chocolates, sweets or wine for the hostess. Other gift giving occasions are birthdays, name days (the birth date of the saint they are named after) and Christmas.

When it comes to giving presents to Polish people there are some small things you should know. In general, Poles get embarrassed when given a overly expensive gift.
When giving flowers it is important to not give yellow chrysanthemums. These are flowers only used for funerals and won’t be received well! When it comes to flowers also try to avoid red or white flowers, and especially lilies and carnations.

Poles have a nice gift-giving tradition during Christmas - it is common to give small gifts to service workers such as postal workers and garbage men.

People in Poland have always been an open-minded and tolerant when it comes to same-sex couples. Throughout history homosexuality has never been banned. The Polish constitution guarantees equal rights to all people and protects them against discrimination on whatever grounds, including sexual orientation.

In cities such as Warsaw, Krakow, Lodz, Wroclaw, Poznan, Katowice and Gdansk you can find a gay community with bars and clubs aimed at lesbian and gay customers.