A quick look into the Polish cuisine

One of the most important aspects of the Polish culture is food. The Poles love to eat and drink and on special occasions it is a considerable part of the day.

The Polish cuisine is quite similar to other central European countries’ but has evolved throughout its rich history. The food in Poland is generally served in great proportions and is typically healthy.

According to the Polish people the main ingredients of their entire cuisine are bread and meat. Although the food is very tasty, it contains lots of calories and can be considered ‘heavy’. So when enjoying Polish cuisine be prepared to put on some weight!

Traditional Polish meals always start with a course of soup. Soup is therefore also an important feature of the Polish cuisine. Among soups, the red beetroot soup called barszcz czerwony or Polish borscht is perhaps the most notable. This dark-red soup is quite spicy, slightly sour and is served hot. Usually the soup is served with dumplings or a fried pate roll. Other typical Polish soups include zupa ogórkowa, which is a cucumber soup, and zupa grzybowa which is made with wild mushrooms.

The main course of a Polish meal almost always exists out of different kinds of meat served with bread or potatoes. All sorts of special meat dishes can be found in the Polish cuisine. Some of the better known Polish meat dishes are Bigos, Zrazy, Gulasz and Kielbasa. 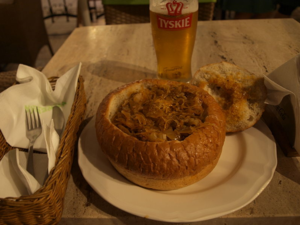 Because of the overabundant presence of meat in the Polish cuisine, it might be a bit harder for a vegetarian to find good food. Luckily there has been an increase in vegetarian dishes and  restaurants in Poland over the years.

Polish side dishes are often salads or vegetables with potatoes. One of the most well-known side dishes is pierogi (Polish dumplings). This dish is as Polish as Polish food gets, and is considered a special treat. It consists of dough, filled with cheese, potatoes, onions, mushrooms and meat. You can also find them with slightly different ingredients or without meat. Pierogi are served steaming hot, boiled or fried and are usually accompanied by sour cream. 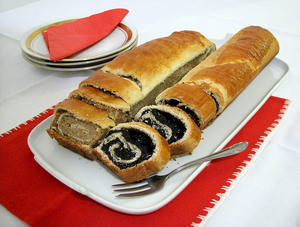 After dinner there is one more course to go. Although it might seem impossible during dinner, try to keep room for the Polish desserts. Poland specializes in all sorts of delicious sweet desserts and candy you must try.