An introduction to the 'art'

Don't think bullfighting fell from the sky and landed in Spain. Iberians hunted the local wild bull since prehistoric times until they were introduced to a religious bull-ceremony, the Mythras-cult, by Roman soldiers. When the Moors invaded Spain, they brought with them an especially aggressive bull and horsemen used this animal to practice their agility in chivalrous jousts. Sometimes Spanish noblemen were invited to take part.

In the 11th century 'El Cid Campeador', Spain's legendary conqueror of the Moors, fought bulls in Madrid and Valencia and around 1097 the first recorded public announcement of a bullfight was for the royal wedding of princess Urraca of Castille. When in 1126 her son Alfonso VII ascends to the throne and a bullfight is organized, professional 'matatoros' (bull killers) are brought in to dispatch the bulls.

For the next 500 years bullfighting stays a royal pastime and still only noblemen are allowed to show off their horsemanship. These exclusive tournaments usually take place on the Plazas Mayores, the main squares of major towns, and are organized to celebrate royal occasions such as weddings or baptisms. Assistants on foot, called 'peones', who are armed with small daggers and pointed sticks to urge the bull on or to lure it away from their master if things get too dangerous, flank the performing 'caballeros'. 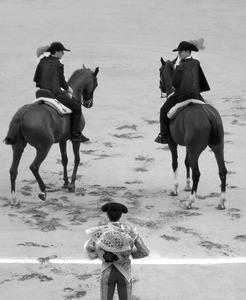 In the 18th century royal influence has diminished. Civilian horsemen are now allowed to join in but gradually their assistants on foot take on a more important role and the once noble horseman is relegated to 'picador'. In 1726 a temporary assistant to a mounted bullfighter, a carpenter from Ronda called Francisco Romero, grabs an old banner to lure away the bull when his master's horse is overturned and takes centre stage. The development of modern bullfighting had reached its starting point. And then there's the greatest myth of all: A bullfight is neither a fight or a sport. In the english language we call it a bullfight because we have no adequate word to describe it. Although most bullfighters are as fit as top-class athletes, it doesn't involve any trial of strength and there are no winners or losers. After all for days now, colourful posters have announced the outcome: the bull will die. But before he does, he is given a chance to prove himself and the way he dies is more important: not like an anonymous piece of meat in a slaughterhouse or as garbage in the jaws of a dragline, but proud and dignified.

But then, what is it? Could it be the enactment of a hunt? Should one see it as an age-old sacrifice, a dramatic religious ritual, or perhaps a fascinating seductive dance with a fatal ending? "The bullfight is the only art in which the artist knowingly stakes his life," said the writer Ernest Hemingway once. Art? So it is an art form shaped by light and shadow and dictated by death? Or is it merely a bloody symbol of human power over an innocent animal? Whatever meaning one may give it, bullfighting is a gripping spectacle, which roots lie in ancient history and is part and parcel of a rich and varied European culture. But are we justified to continue this in our so-called 'modern and civilized society'? "Only when people have reached a stage where every form of barbarism against humanity is banned one can start worrying about the oppression of bulls," wrote playwright, poet and matador Ignacio Sanchez Mejias in 1932. Two years later he would die on the horns of the bull 'Granadino'. And mind you, Europe was named after a mythological princess who was abducted by the god Zeus, disguised as a white bull!

Amparo Mallen wrote in her introduction to the book:

"The articles published in this book have been written out of respect and in admiration. They are light in form, but weighty in their content. Some have been livened up with a touch of glamour. Due to his professional background, Pieter Hildering teaches and shares his knowledge and he does so with honesty and mastery. He entertains and clarifies to explain the concepts. Reading them one hears the applause in the stands, smells the pasture, the bull. One feels the tingling of expectation before the unknown of an afternoon of bulls. In his writings one imagines the colour of the spectacle.
With this work, Avance Taurino crosses the boundaries of Hispanic geography, of this bull hide-shaped land. It will travel to the capital of the world, to New York, to London, and perhaps to the land of the Asian giant where visionaries and enthusiasts try to introduce the Feast of bullfighting. Thank you maestro, on behalf of the aficionados of the world!"

"These pieces read very well. There's lots of information and no doubt they will serve an educational, as well as an entertaining function."
Michael King, Vancouver, Canada

"These thoughtful and basic - but fact-filled! - articles have always been a delight to the English-speaking afición, and surely make newcomers to the plaza feel welcome to what may otherwise be strange surroundings."
Lore Monnig, president of the New York City Club Taurino, USA

"I have just completed your very excellent book about the toros. I especially liked the journalism...tert, carved in stone... very Hemingwayesque... and informative.... Some damn good writing here!
Right to the point... PAPA would have been proud! I am going to recommend it to the many neophytes I get coming to my site asking ME to tell them MORE.... why?... when a simple and concise book is out there already."
Ric Polansky, Mojacar, Almeria, Spain