Xenophobe’s guide to the Spanish

The aptly named ‘Xenophobe’s guide to...’ series offers insiders’ perspectives on the peculiarities of different nationalities, educating the philistines among us.

Immersion in another culture can be a daunting prospect but Xenophobe’s guides aim to simplify the experience and encourage appreciation of the things that make different countries, well, different.

Xenophobe’s guide to the Spanish is an affectionately written account of the Spanish estilo de vida. With first-hand experience of Spaniards and living in Spain, Drew Launay writes with an acute awareness of the subtleties of Spanish culture. The guide simultaneously dispels the myth of the Spanish being lazy, donkey-riding, sombrero wearers, whilst highlighting that sometimes the stereotypes are not actually far removed from the truth. It undeniably enlightens the uninitiated and endears the Spaniards to all.

‘Only if it’s enjoyable’

The guide highlights that ‘individualismo’ is fundamental to the Spanish and their eternal endeavour for pleasure; even if it is at the expense of almost everything else. The highlight of Xenophobe’s guide to the Spanish is the jovial way in which it pokes fun at the truisms of the Spanish people. Nothing is ever really organised or plans adhered to, and the running joke that appointments are not kept due to encounters on the street and spontaneous coffees makes entertaining reading for those already familiar with, and those yet to encounter the easy-going Spaniards.

The laid back attitude of the Spanish people influences every aspect of life in Spain. The book reveals the reasons behind many of the quirks of the Spaniards, for example we learn that paella is their national dish arguably as a result of the universal inability to do anything on time. Everything can be prepared in advance and then it only takes 20 minutes to cook, comfortably fitting into the sporadic way of life.

Time and again the Xenophobe’s guide reinforces the aspects of Spanish life that at times seem peculiar, or downright ludicrous to foreigners, are in fact an intrinsic part of the cultural identity. It irreverently mocks the preconceptions and exalts some of the most unique characteristics of the Spanish people. The Spaniards don’t take anything very seriously, much less themselves, and the guide’s playful tone mimics the reckless abandon with which the Spanish approach life.

From the infamous ‘mañana’to the mentally unhinged drivers, the matriarchs to that ubiquitous chewy, salty ham, no aspect of Spanish culture is overlooked. The importance of the siesta is the basis for many a joke about the Spanish people and is a recurring motif in the guide. It stresses how many everyday things in Spain can be a logistical nightmare as so often people are asleep when something needs doing. 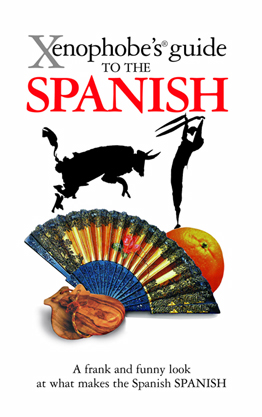 In exploring the humble cuisine of Spain the Xenophobe’s guide humorously (though perfectly) evokes a typical Spanish diet in a reprise not dissimilar to Monty Python’s infamous Spam song.

On a more serious note, it tentatively touches upon the Civil War and the subsequent rule of Franco, but also the influence that it has had on the Spanish world view. It is suggested that it plays a large part in their almost total disregard for authority or any form of restriction in the pursuit of enjoyment.

Xenophobe’s guide to the Spanish will be enjoyable for those with previous experience of Spain, with the idiosyncrasies described recognisable on any street or in any bar across the country. Equally, the guide serves as an ideal crash course for newcomers.

There is much truth in the statement that ‘All that is predictable about the Spanish is their unpredictability’, but as Xenophobe’s guide to the Spanish demonstrates, it just adds to the fun!

For more information, read the Xenophobe’s guide to the Spanish

This article has been written by Jade Carracedo