What you should know about Spanish taxis

Taxi ranks (paradas de taxi) are located outside railway stations, at airports, and at main intersections in towns and cities. In major cities you can hail a taxi in the street, but in small towns they’re available only at taxi ranks.

You can also call a radio-taxi in most towns and cities, but you must pay for the taxi’s journey to the pick-up point. It’s advisable to book on the day you want a taxi, preferably close to the time required (if you book too far in advance a taxi may not appear at the desired time). In cities and many towns, you can also rent luxury chauffeur-driven cars (grandes turismos), by the hour or for a fixed fee for a particular journey. You can for example pre-book an airport transfer with Solhop , who operate out of all major Spanish airports 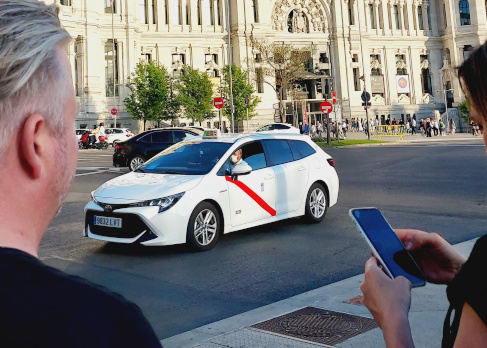 There are many different apps that allow you to hire a taxi. Research for the local taxi hiring app if you are looking for a taxi in a specific city. In most big cities you as well can opt for UBER or the Spanish version of it called Cabify .

Spanish taxi drivers are a pleasant surprise to many foreigners, particularly if you come from a country where taxi drivers are surly, rude and dishonest, as they generally take passengers by the most direct route and don’t usually overcharge. Contrary to the practice in most other countries, it isn’t usual to tip taxi drivers in Spain. What’s more, Spanish taxis are among the cheapest in Europe and many people routinely use them when shopping. A recent consumer survey found that the most expensive taxis were in Castellón, Murcia and Tarragona, and the cheapest in Almería, Cadiz and Santa Cruz de Tenerife.

Madrid has more than 16,000 licensed taxis (one of the highest densities in the world), which are black or white with a horizontal red stripe on the side and the city’s coat of arms on their doors. Taxis usually have a maximum capacity of four passengers. Tariffs are controlled and the fares for the most popular destinations may be displayed on a board at taxi ranks (particularly when taxis have no meters). All taxis levy a standing charge, a charge per kilometre, a surcharge and/or higher kilometre rates at night and on Sundays, and various surcharges (e.g. for luggage, pets). Note that many taxis won’t carry dogs. There are special taxis for disabled passengers in many towns which carry wheelchairs (ask when booking).

You should only hail a taxi that’s travelling in the direction you wish to go, as they won’t usually do U-turns. A free (libre) sign or a green light at night indicates that a taxi is for hire. If a taxi is displaying a red sign with the name of a local neighbourhood, it means the taxi driver is on his way home and isn’t obliged to pick up passengers unless their destination is on his route. If you go outside a city’s limits (shown by a límite taxi sign), you may be required to pay double the fare shown on the meter (e.g. in Madrid).

In all cities and major urban areas, taxis are fitted with meters (make sure that it’s switched on). If a taxi has no meter, you should agree the fare before commencing a journey. If you aren’t fluent in Spanish, it’s advisable to write down your destination, so that there’s no misunderstanding. Beware of illegal unlicensed and unmetered taxis operating in main cities and preying on foreign visitors.  If you think you’ve been cheated, ask for an official receipt (recibo oficial) showing the taxi licence number, start and finish points of the journey, the date and time, and the driver’s signature. Send it to the local licensing authority with your complaint.