Fiestas and Traditions in Spain

Spanish culture is full of festivities that people wait for all year round and some of them have decades of history, passing on from generation to generation. Here are some of the most known and celebrated festivals in Spain.

Día de los Reyes Magos (Three Kings’ Day) - on the 6th of January, kids all around Spain wake up and the first thing they do in the morning is open up the presents. Celebrations start the day before with parades re-enacting the arrival of the Three Kings. Traditionally, families gather to eat the roscón de Reyes, which is a large bagel-shaped cake, usually filled with cream.

Semana Santa (Holy Week) -  this traditional religious festival takes place during Easter. Dramatic processions fill the streets and some people get very emotional. There are various religious spectacles throughout the week, including biblical statues being carried through the streets.

San Fermín (Pamplona Bull Run) -  a nine-day festival that starts on the 6th of July in Pamplona. It includes traditional dances, processions, bulls and plenty of noise. This popular fiesta welcomes daredevils to run in front of a group of angry bulls. 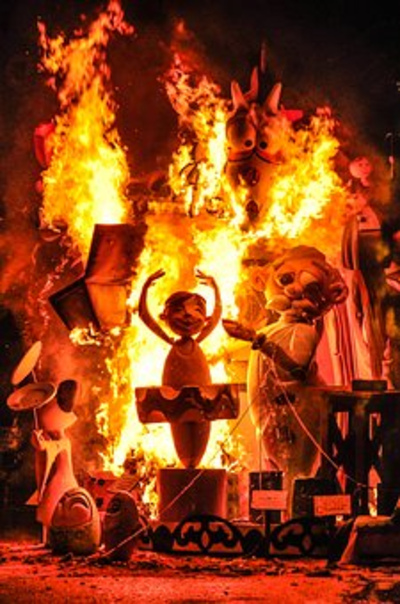 Las Fallas de Valencia - this party takes place mid-March for five days. Enormous statues and figures embody satiric pop-culture events that happened the year before. After presenting the statues, they are burnt down. Spectacular fireworks take place during the day, as well as a light show during the last night of this festival.

La Tomatina (Tomato Fight Festival) - it’s celebrated in Buñol, a town in Valencia, on the last Wednesday of August. This festival consists of an hour-long tomato fight. The tomatoes are smashed beforehand to avoid injuries. This event gathers around 20,000 people, making it a destination for tourists from all around the world.

Eating 12 grapes on New Year’s Eve - it’s a Spanish tradition on New Year’s Eve to eat twelve grapes one by one, synchronised with the chimes at midnight. It is said that if you manage to eat all the grapes in time, you will have a prosperous year. Whether you believe this or not, you should try it as it’s a great way to fully experience Spanish culture and traditions. The New Year’s Eve festivity is broadcasted from Puerta del Sol, the main square of Madrid. Thousands of people gather in this square to celebrate the arrival of a new year in a euphoric atmosphere.