Within the walls of Roman theaters your imagination brings to life the poets sharing their hearts, gladiators fighting to death, musicians composing their song in the arena where you stand.

Although now one of Lyon’s most recognized features, the Roman theaters of Fourvière remained largely hidden until 1980, five years after the completion of the neighboring Museum of Gallo-Roman Civilizations. Beauty lies in the fusion of rich history and contemporary architecture, ancient and modern culture, knowledge, and research housed here. The unique theaters host the annual live performances of the summertime Fourvière Nights festival. 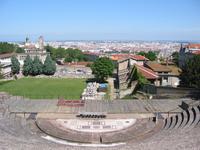 Edouard Herriot, mayor of Lyon from 1904 until 1941, prompted the 46-year archaeological excavation of the Fourvière sight. As the hillside unearthing continued, public squares, streets, homes and shops were revealed. Their design wraps around a center arrangement not found elsewhere in antiquity, the Grand Theater and the Odeon. These two ruined, semicircular theaters are remnants of a major Roman political and religious city. This capital of Gaul was founded in 43 BC as Lugdunum. It is now known by the name of Lyon.

The Grand Theater watched the rise of Roman history and held gladiatorial contests. Dedicated to, and probably built by, Augustus in15 B.C., the Grand Theater is the oldest such theater in Gaul, comprised of present day France, Belgium, western Switzerland, and parts of the Netherlands and Germany. Excavations completed in 1945 showed that what had been believed to be an amphitheater was in fact a full theater.

The Grand Theater’s original design encompassed 89 meters in diameter and held two tiers with each tier seating 4500 audience members. Both an upper covered walkway and a lower walkway were later converted to create a third and fourth tier of seats, bringing the capacity to 10 000 people.

Although the Odeon is the smaller of the two theaters at the Fourvière sight, it is one of the largest known of its kind, rivaling the Odeon in Athens built by Herodicus Atticus between A.D. 161 and 174. In the entire former Gaul region there is only one other Odeon, located in Vienne, 30 kilometers south of Lyon.

In the ancient empires of Greece and Rome, Odeon theaters were smaller than dramatic theaters and often covered by a roof. Poets and musicians presented their original works to be judged and awarded by the public. Now called an Odeum, the tradition continues in modern contemporary theaters and concert halls used for musical or dramatic performances.

The Odeon of Lugdunum comprised two stories, the first having a 90 meter long and six meter wide vaulted gallery decorated with a mosaic. The upper level held a walkway supported by strong columns. The massive semicircular wall of the Odeon likely supported a wooden roof at one time. This stone wall was visible before the excavation, as were niches under the service stairs.

The Museum of Gallo-Roman Civilization

To the north of the Roman theaters sits an architectural marvel housing a remarkable collection of archaeological finds. The Museum of Gallo-Roman Civilization brings to focus the private and public life in Lugdunum from its foundation in 43 B.C. to the early Christian era.

Objects, inscriptions, statues, currencies, and ceramics collected by Lyon’s scholars in the XVI century form the Museum’s collection entitled Five Centuries of Discovery. Other collections include the Largest City of Gaul, Men and God, Games, an Economic Metropolis, and Artists and Artisans.

As a special attraction, the Museum offers workshops and events for children. Special times are set aside for adults viewing the collections. Guided tours are available and the Museum is handicapped-accessible.

Thursday
Free museum access for all
Must pay for temporary expositions

By Kari Masson, a freelance writer for travel, cross-cultural, and expatriate-focused publications. More than 50 of her articles have appeared in North America, Europe, and Africa. If you are looking to add dynamic creativity to your publication, contact Kari at
www.jkmassonprint.blogspot.com