The birth of a symbol of Paris

Maupassant eventually left Paris permanently so as to never have to see the “metallic carcass,” he found so unattractive. Apparently, millions disagree with his opinion of the Tower.

Today, the Tower is a symbol of Paris. Visitors from around the world make their pilgrimage to pay homage to what was once considered an eyesore, but now a striking architectural masterpiece. Its appeal reaches across generations and cultures and praises the genius of Gustave Eiffel. 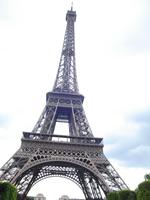 Eiffel’s design was selected unanimously from more than 700 proposals for the International Exhibition of Paris of 1889, commemorating the centenary of the French Revolution. In collaboration with engineers Maurice Koechlin and Emile Nouguier, architect Stephen Sauvestre, fifty workmen, 100 ironworkers, and 121 laborers, Eiffel and Company built the tallest building the world had ever seen. Work began on January 23, 1887 and ended in 1889, two years, two months, and five days later. The controversial edifice was inaugurated on March 31, 1889, by the Prince of Wales, later King Edward VII of England.

The Tower was not intended to be a permanent structure and plans developed to tear it down in 1909. The saving factor for the Tower was its height of 300 meters, the uses for which increased as time passed. Originally, its antenna was needed for telegraphy. In 1910 the Tower became part of the International Time Service. French radio adopted use of the Tower in 1918, followed by French television in 1957.

The Tower survived a difficult birth and has experienced its share of fascinating events in its lifetime. In 1923 a journalist by the name of Pierre Labric, future mayor of Montmarte, descended from the first level by bicycle. Whether his ride was by stairs or exterior leg is still debated. The Tower was scaled by a mountaineer in 1954. Thirty years later, two Englishmen parachuted from the Tower.

For visits to the Eiffel Tower, take the Paris Métro to the Trocadéro station and walk from the Palais de Chaillot to the Seine. The walk will include amazing views, possibly the Trocadéro fountains, dancers, and acrobats who perform around the Palais de Chaillot. Beneath the Tower spreads the green esplanade of the Parc du Champs-de-Mars, stretching out southeast to the 18th-century Ecole Militaire. On a clear day, the view from the Tower top can reach 67 kilometers.

By Kari Masson, a freelance writer for travel, cross-cultural, and expatriate-focused publications. More than 50 of her articles have appeared in North America, Europe, and Africa. If you are looking to add dynamic creativity to your publication, contact Kari at
www.jkmassonprint.blogspot.com