The Louvre for expats

5 Louvre artworks not to be missed

If you move to France, you will be able to experience the country’s splendid culture. The Louvre museum hosts the most important national collection in France. We have selected 5 works from the Louvre Museum that you mustn’t miss during your stay in Paris.

1. The Raft of the Medusa

The Raft of the Medusa is a work by Théodore Géricault dating from the 19th century. Today considered as an icon of romanticism, this painting was inspired by a real historical event: the sinking of the French frigate La Méduse in 1816, bound to colonize Senegal. A true nightmare in the heart of the Atlantic Ocean. After a terrible storm, 150 men were abandoned to their fate on a makeshift raft governed by despair and madness. Géricault's brushstrokes reflect the darker side of humanity by capturing the animality and distress that appears in the men who kill one another. 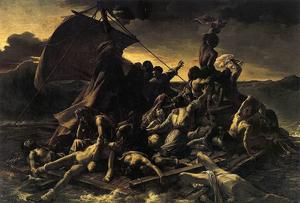 2. The Cheat with the Ace of Diamonds

Three temptations for one man: wine, gambling and lust. A recurring theme of the time that is represented in this 1639 painting by Georges de la Tour. This painting must be interpreted as a warning against these three very common temptations which went against the moral standards of the period. Faithful to Caravaggio, de la Tour plays with light and this work is reminiscent of The Cardsharps, painted in the previous century. 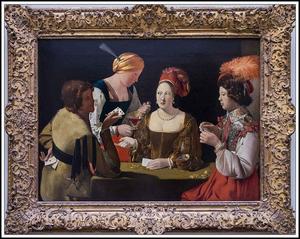 Who can remain indifferent when faced with this sculpture, a true ode to love which can only inspire romanticism and tenderness. The neo-classical Italian master Antonio Canova evokes the story of Psyche revived by a kiss from Cupid. This masterpiece is characterized by a reunion between Cupid descending from heaven and Psyche rising to him. The work is of a particular beauty and is enhanced by its strategic position in the museum. 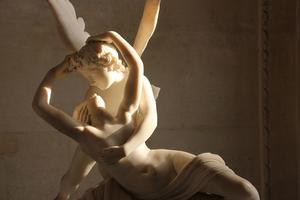 4. The battle of David and Goliath

This painting on slate was created in response to a topic oft-debated by scholars and artists of the time: painting or sculpture, which of these two arts is the finest? At the beginning of the second half of the 16th century, Volterra decided to create this work inspired by a drawing by Michelangelo. He demonstrated that painting could rival sculpture by painting both sides of the slate. Almost two centuries later, this painting was offered to Louis XIV with a gilded wooden pedestal that allowed the painting to turn on itself. Today, this masterpiece is not displayed on the wall, it is free standing on a raised, golden colour pedestal allowing visitors to fully view the masterpiece in the ‘Grande Galerie’. 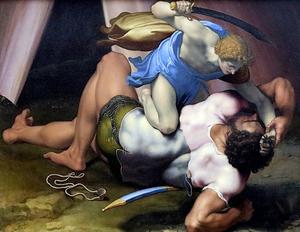 Every spectator succumbs to the strange charm of this monumental, armless Venus.  This fascinating sculpture was discovered on the island of Milos (hence its title) in Greece in 1820 and was offered to Louis XVIII who very quickly donated it to the Louvre. This armless and nameless sculpture exudes mystery and piques one's curiosity. A symbol of classical beauty, the features of her face perfectly respect the criteria of ancient Greek sculpture but her body moving in an almost sensual manner goes far beyond. 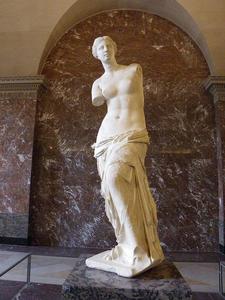 You can buy your tickets for the Louvre Museum with Musement .