Following in the footsteps of shepherds

“Go for a walk with a donkey?” Telling a few people about this journey was met with smiles and laughter; then interest. When you explain that the idea is to experience what travelling used to be like and have an adventure, you spark people’s interest. 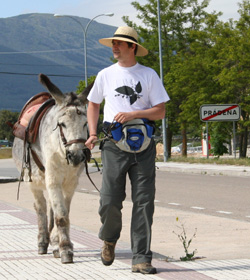 Spain is one of the most mountainous countries in Europe. An hour by car to the north of Madrid, lies the Sierra de Guadarrama-Alto Manzanares. The ascent into the mountains is spectacular; you leave the city behind and enter a very beautiful part of Spain.

Our adventure started in Prádena, where we were introduced to Cardena, the donkey who would be accompanying us on our walk. After being provided with detailed written instructions, a low scale map of the area and a bota (leather wineskin filled with wine), we were ready to go…well almost.

First we had to get acquainted with how the saddle, bit and reins worked and get the saddlebags on with our kit inside. You are fully responsible for the donkey, so you need to know how everything works. The kids were a little apprehensive at first, but very interested and excited about our travelling companion. She was extremely well behaved and straight away our three-year old started to get to grips with some basic manoeuvres.

One of the great things about this trip was that we could go for a long walk with two young children, as they can get on the donkey when they get tired. This means you are not limited to paths where a buggy can go, or condemned to carrying them around. Our three-year-old was a little concerned when it was first suggested he get in the saddle on what for him was a giant. When he got up, it quickly became clear he wasn’t going to give up this comfortable mode of travel. He then started to complain about the adjustment of his stirrups and asking for a sword; knowing all mounted knights need to have a sword… 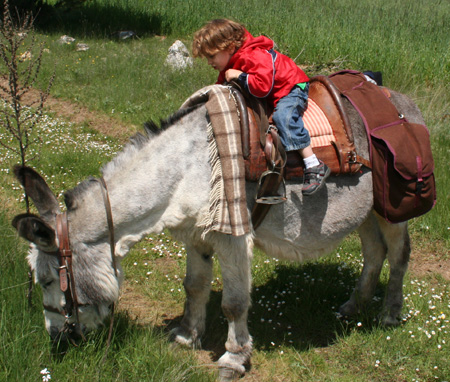 Having a set of written directions removed the need to worry too much about where we were going. Although sometimes you had to decide about what was really a crossing of paths we didn’t get lost once. As we progressed we fell into an easy rhythm with the odd stop to let Cardena munch on a fir bush (her favourite snack, it seemed) or take a break and soak in the quiet tranquillity of the countryside. 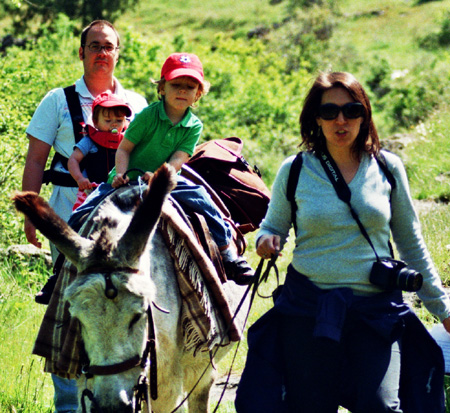 The route we travelled was mainly on old paths which were used before roads connected up the villages, and which are still used by people to drive livestock and to reach fields and smallholdings. Stone walls and quiet open spaces mean you very quickly find peace and connect with nature. A wet spring meant there were fields of wild flowers in some places; to the point where the elder of the kids saw a mass of daisies, asked why it had snowed and where was the snowman! An indicated detour off the path showed the source of a river bursting forth through the rock; parts of the area are limestone with subterranean caves and watercourses. 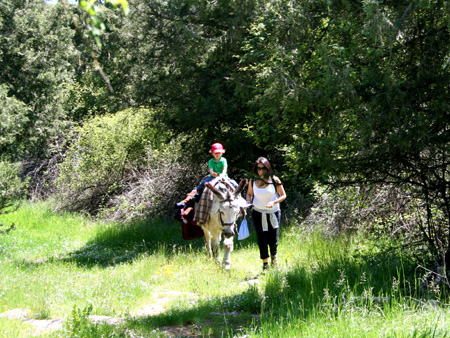 Donkeys have a reputation for stubbornness, but Cardena was very co-operative. Like with all domestic animals you have to play a confidence game. If you don’t show who’s boss, you very quickly end up being dictated to. At one point passing a water trough, I thought it would be a good idea to let her have a drink. She was not interested. She then refused to cross the shallow pool of water beside the trough, but a firm pull and a couple of ‘yaahs’ got her going again. Even the most ‘urban’ person would not have a problem - unless scared of animals - of being in charge.

The only downside of travelling with an animal is that your party may be a little larger than planned; every winged insect in the vicinity travels with you! The upside is massive, as the experience and whole excursion feels very different to just taking a walk in the country. For some reason, it feels much more like travelling and gives a real impression of what our ancestors must have experienced. 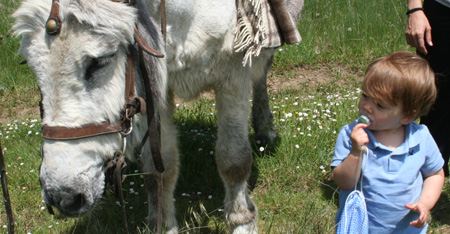 After parking the donkey out front (and attracting much attention from everyone passing by) we ate lunch at the Hostal La Cerca. For appetizers, we were given morcilla (roasted black pudding with rice in it which is a regional specialty) and cortezas (like pork scratchings, but with some meat so less fatty); lucky we had been for a walk. We followed this with a succulent cuarto de cordero asado (quarter roast lamb) and salad. At the weekend, many Madrileños travel up to Segovia just to eat this traditional dish. It’s not hard to see why, as it is served up roasted in an earthenware dish with a gravy of the roasting juices. 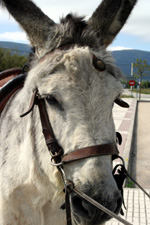 We finished the trip relaxed and with the firm impression of having done something different and bit ‘special’. The only problem is the next time we go for a walk we are going to have explain to the kids why we don’t have Cardena with us…

About this trip - ‘Away from the crowds’

Set up by two brothers who are pioneering ‘adventure tourism’ in this region, Away From the Crowds organises trips with donkeys, on Vespas and by bike. With well-prepared and documented itineraries you can get to discover some beautiful and unknown places. They have a range of trips of different durations and can cater to specific needs. 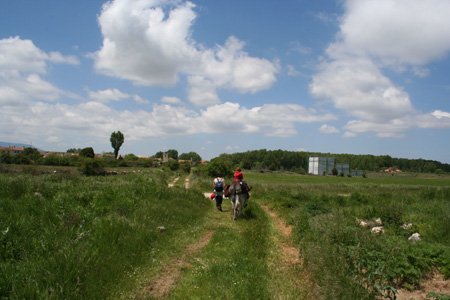