Verdict on the Grapevine

They come by the thousands, hoards of people flocking to the west coast of France. Connoisseurs, traders, pundits and amateur enthusiasts from across the globe have set upon a pilgrimage - a journey which finds its destination at the renowned vineyards of Bordeaux.

They come by the thousands, hoards of people flocking to the west coast of France. Connoisseurs, traders, pundits and amateur enthusiasts from across the globe have set upon a pilgrimage - a journey which finds its destination at the renowned vineyards of Bordeaux. 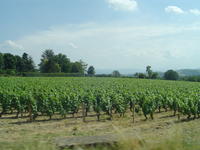 As the largest wine region in the world, with over 284,320 acres under vine, 9,000 wine-making chateaux, 13,000 wine growers and producing around 800 million bottles annually, it may come as a surprise to discover that Bordeaux has been suffering in recent years. The market for its prestigious top end wines has never been in question and continues to thrive, yet Bordeaux, like many other prominent French wine regions, has been experiencing a steady decline in its low to medium priced bottles. Much of this decline has resulted from the competition of New World producers, such as the United States, Chile and Australia, who have combined impeccable and superior branding with offers of cheaper and more accessible wines.

With the value of both its wine and land plummeting for the past three years, and doomsayers predicting that many French wines are destined to fade away, it seems as if Dionysus, the Greek god of wine, has provided a timely answer to French prayers by gifting Bordeaux one of the greatest vintages of the last hundred years.

Wine experts throughout the world have raved in unison about the extraordinary quality of the 2005 vintage, heralding Bordeaux’s comeback. The influential American wine critic Robert Parker tried his utmost to curb the enthusiasm surrounding Bordeaux 2005, but ended up incapable of containing his joy. Such universal acclaim has not surprisingly pushed prices of the much-lauded 2005 vintage to a point where the majority of people will be unable to enjoy its magnificent flavors. Some chateaux owners are seen as having the power of a blank check, particularly since most high-end French wine is purchased by foreigners who traditionally pay higher prices for prestigious bottles. Indeed, early indications show that increases above last year’s prices are ranging from an eyebrow-raising 25 percent to a wallet-whopping 325 percent.

For those of us who would like the opportunity to indulge in some fine wine tasting, without breaking the bank in the process, there is an alternative. The Office of Tourism for Bordeaux offers affordable tours of the famous wine district throughout most of the year. Starting from 24 euros for a half-day and up to around 70 euros for a full day, introductory courses on wine tasting are offered alongside guided tours of the wine chateaux in the main appellations. As a general rule, France tends to be at its best in the spring, and Bordeaux is no exception. Its proximity to the Atlantic Ocean protects its grapes and visitors from both wintry chills and excessive heat, so you can expect a mild and agreeable climate.

If wishing to visit the celebrated wine region, it is wise to plan ahead rather than take a spur-of-the-moment excursion, as you might find yourself struggling to find accommodation at certain times of the year. For example, if you plan to visit Bordeaux over Christmas, New Year’s, February to March or mid-July to the end of August, be prepared to come across a tolerance-testing torrent of children on school holidays as well as adults taking leave of the cities for a long weekend. Finding inexpensive and sometimes any accommodation during these busy periods can prove problematic. Furthermore, wineries are often closed during the grape harvest in October, and most require advance reservations for visits. But with a little preparation you can find yourself joining other wine aficionados and revelers in their pilgrimage to the Dionysian paradise of Bordeaux: the birthplace of the finest wines ever produced.

For more information on guided tours of Bordeaux, see the website for the Office of Tourism at: www.bordeaux-tourisme.com

By Simon Mussell
Simon Mussell is originally from Portsmouth, England, and now resides in Brighton, where he is concluding his Masters programme at the University of Sussex. Having studied sociology and political theory, as well as philosophy, Simon has a keen eye for social and cultural phenomena. He produces commentaries on a wide range of issues relating to contemporary society.