Eating with your own chopsticks

Article on the politics of life

What can I say about the miracle City of Hangzhou? Fast growing and bustling quickly between the old and new.

This sleeping Dragon has been awaken and with a future economy that's booming, one can only think about the dichotomies of this nation in the Far East. A nation that struggles between Communism and Capitalism. It's growing and they want to learn English for business. So maybe we should take note and learn Chinese. The future is global and China is coming out!

When coming into this amazing city, the feeling is one of special experiences and growths of a nation coming finally to terms with itself and its constant dichotomies. One eats with his or her own chopsticks. With a unique method or blend of making one’s way into this great, but imposing society. There is a view and perspective in a society that nobody can ignore… “Just like America during the 1950s…” - Rudi du Plooy. Many people feel about Hangzhou in the same manner, city famed for its Westlake.

China has been a place that has existed in culture for five millennia. Focusing on the best: for its food and the way things are done. For the most part, Chinese after all did invent gunpowder and nearly took over the world before the 14th Century when they sailed as an Empire into places like: Vietnam, Laos, Kampuchea, Malaysia, Singapore and Myanmar.

Amazingly their Empire closed within it self and after that, it went directly into decadence. Later having the English to harass them during the 19th Century, pushing opium across China, conquering, Shanghai and Hong Kong. It was internally where China built mostly on tradition through its Cities such as Hangzhou. Places where Marco Polo himself traveled across China and built his fame as a merchant, adventurer and explorer. It was from here that he found Lo Mein and took it to Italy to make it into Spaghetti.

What can one say about a warrior, poet society? There’s much to learn from them from North to South, and East to West. It doesn’t matter how one sees it. China is opening-up its arms and allowing foreigners to enter. You can see and notice ‘aliens’/foreigners from all walks of life coming into the city of Hangzhou, and trying to find there great opportunity and explore all possibilities.

In and around China

For Solo Traveler and business professionals, “The sky is the limit… Some say you got to get it!” Business is booming and wanting to be part of the historical process is just amazing. 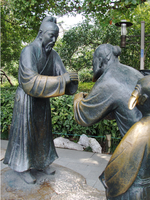 A country that feels vibrant, although it has its social and political problems, a reality that does occur everywhere. Hangzhou vibrates with the rest of China and so forth. Avenues that lead and take the visitor into its impressive sites. From the Pagodas decorating the older apartments from the times of Mao Ze Dong to every kind of high-rise and art-deco building; there is a life beating inside this “Red Dragon”. It can come out with true zeal for their nationalist points of view!

Furthermore, like “The Kingdom of Heaven” or center of Universe, China is not stagnating anymore from within. It is going outward to expand on the possibilities of growth. With a true dichotomy between Capitalism and Communism, in some strange way, they are working it out! Inside “an organized chaos”, but still working it out! And this is a fact, as stated before…

What has made China today open-up ‘again’ is the fact and looking back on history when two men in 1972 and 1973 made great strides in establishing relationships between East and West. Those were Mao Ze Dong and Richard Nixon. After generations of closure between the two countries, there was a meaning (something like a miracle), which are those rear moments in politics, were a sincere openness for friendship wanted to occur. It happened, and for those simple reasons today Westerners can explore China’s developing society and Easterners can learn more about themselves, the rest of the world and how it functions.

And in every culture, one takes the good with the bad. More to explore, expand, learn from each other and allow tolerance to permeate between both countries, China and the United States. There is so much to learn during these fascinating times!

As I walk to the Westlake and enjoy Streets like Xixi, I am in awe with the events that are happening to this country before my eyes and the possibilities! Before I see a statue of the great explorer Marco Polo and decorating near the City’s scaled map, there is a monument to Bai Yuyi (the Governor Poet). In front of the latter, there is another statue of his servant, giving him honors (pictured above left). Many rub the ear of that servant it is a symbol of good luck!

Hundreds of people decorate the park. The elders do Tai Chi, and the young focus on dancing to feel alive again, inside a society that works 12 hour days, six days a week. There is only one rest-day, and it certainly is enjoyed to the max. 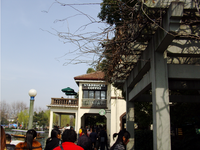 I come to view and soon find myself at the waters edge. I turn around and see posters endowing the government philosophy of-‘working hard to honor the nation’ and on the other hand, I’m near a Starbucks Coffee House decorated in fine Chinese-architecture and reflecting on what can be and what will be…

And then I laugh to myself, the contrast of this country, how amazing?