Thoughts on the People's Republic

The systems are not fully functional yet for this Giant called China to integrate itself to the world. Still trying to find a path, and although they are doing well, the country with a five millennia has a long way to go to become a world superpower.

For the next 20 years it will not be a reality! With a society very afraid of their own shadows, it is not possible to fight an educational style has maintained them suppressed for the past 60 years and before that another 500 years in which ‘their doors were closed’ to the world. Not knowing their own borders, China has been closed, still thinking it is the “Center of the Universe” and forgetting that there are another 194 countries in the global competition. The government is certainly controlling and communist, with a capitalist form that it’s like throwing a kid some candy or treats to keep them quiet. The society arising can be very powerful only if their learning form was more creative, less restrictive or traditional. 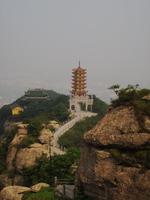 This is certainly true when you ask them about the history of their country and all they can tell you that they have 5,000 years or most remember the war with Japan and Civil War; seeding them down in hatred against Japan and Taiwan. Believing, most of them that Taiwan is a part of China and not realizing that the Taiwanese do not want anything to do with the Chinese system and form of government. The same is with the language, not all is done in Mandarin as the government pretends to show. The past will not build the future by helping them remember it. And however, out of 60 television channels, at least 11 are always recalling the Second World War and the Civil Conflict. Can this be a fact?

Maybe living in China has changed my sense of objectivity. And furthermore, I try to recall what made this country great: their devotion to hard work, their struggle against 1.4 billion other brothers and their sense of family. Something I have never seen in other countries, it’s almost fanatical and in one moment it can all change. There is a brake from the traditional movements and from the old believers of Mao, slowly, and it is coming. This is life and the way of living in China. They still need assistance, but who will help them. Perhaps the United States should stop their paranoia before the Russians, move in and certainly to further their stance in China. While the examples stand with corporations like KFC, McDonald’s, Starbucks General Electric and GM are doing it, why not the American government further in the globalization race. With the capability of a four million man army, they have the people, but the decision making process it is not there. It would be easier to invade Shanghai and keep it for a week until they made a concrete decision on what to do. The same happened during the Second World War, when the Japanese invaded, the Chinese generals would not make a decision. It took them a week and in the mean time, the rape of Nanking was happening.

Chinese education is not the best, although they are nearly six days a week and go in for 14 hour days. They are taskmasters and they hate education by the time they finish High School. But with no life, in a boring environment, all they have is their work, school, unhappy lives and plenty misery to go around. The only thing that matters, they will work as slaves for it is to bring up their children. The Chinese will work themselves to death! While the west is eternally optimist, the Chinese are eternally pessimist. With nothing more, they will overpressure themselves into marriage and not even enjoy their jobs, because it is an eternal vicious circle of boredom and nothing original to do. The only sophistication they receive is through the University or from a Westerners point of view. This is life, but not one enjoyed by them. The changes have come slowly since the days of Tiananmen Square. People are now starting to realize little by little that with hard work and money, they must come for the enjoyment of it and its pleasures.

The other progress and craziness has come in the form of cars in less than 10 years. Like a crisscross of madness, one even has to watch the Zebra crossings. People out of control and in chaos, not understand the meaning of doing a line, they become extremely rude amongst themselves and not necessarily to the foreigners. They are in their majority a great people, with the same passion and capability of love like all others. However, their past system has also caused their present social problems. It is too rigid for the new China that is growing, so they do have to change and rapidly. Only operating on automatic, China has to come a long and further way for us the West to be scared of them. Very few understand unless they have experienced Western culture or influence. There is no need for them to stop being Chinese, but be aware that there is world out there. They are forgetting the greatest of the Beijing Opera. Putting aside people like Confucius, Sun Tzu, Sun Pin, Lao Tzu and LuXun for the culture of materialism without consciousness.

They are involving from the ‘hung over’ of Mao and learning to accept that there are better ways to form a government. A system that can go Capitalism, it can work. Also, it may help the problems with Taiwan and Western China. What the government continues doing is throwing ‘candy’ to keep the population calm from further confrontation. They have plenty to learn from their own world, before they can talk about other peoples. The sadness is when they realize what’s going on? A country that is always ready to remember Japan than to wake-up and look towards the future. The only way to describe this is to be more forgiving. Less angry of what has been done to them and go into a global society before again they miss the boat of progress. The Chinese think like it is 1960, with 2009 technology. Can they make it? Can they become better? Or will they again close-up and submerge into obscurity. This, the China of the Great Wall that has closed even “Facebook” for being too opinionated and has blocked-it for these past four months. Incredibly, when a society it is not conditioned to be opinionated, it finds itself lost in the ‘muddy’ past and stuck, it will not easily get out. Only if only one can give China hope, it can be in the next 20 to 30 years until it reaches the height of power like the nations of Europe and America.

The world is one and globalized, and here I have to disagree with Thomas Friedman, China has a long way to go in Science, Modernism and progress. Maybe through government they can make some advances, but through its people it will take longer until they don’t give up the populace fear, they will not go forward. Also, they cannot be so afraid of “loosing face” or too shy to deal with outsiders. Living in shyness and fear of their own shadows, it is easier to tell them what to do and take advantage, than the majority making an intelligent decision for themselves. They need to think for the future before acting and become one; even for those that are Chinese, Muslim, Manchurian, whether they speak Cantonese or Mandarin, a nation of one and not divided in itself. A nation that denies to themselves that they are one and expose to the world that they are one in language and history. Hard to say when watching what has happened everyday in China, abuse of rights! It is one thing what America does outside of its borders and another, what they do inside. The same should ring true for China.